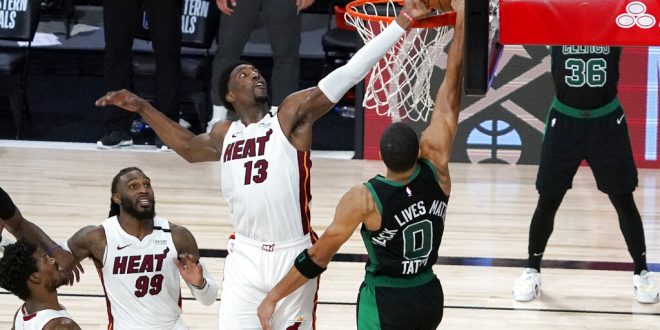 The battle in the bubble continues as the Heat hope to gain a 3-1 series advantage over Boston Wednesday night. Miami looks to take Game 4 versus the Celtics in this evening’s highly anticipated matchup.

The Miami Heat will aim to regain focus on the court when they face the Boston Celtics in Game 4 of the Eastern Conference Finals. After coming off of an 11-point loss to Boston, the Heat plan to maintain control on the floor. Both teams had several days off since last Saturday’s Game 3 head-to-head clash in Orlando. The Celtics prevailed in dominating fashion as star small forward Gordon Hayward made an impressive return.

Hayward’s immediate impact assisted with the Celtics handling the Heat in their only win of the series thus far. Although the playmaker’s stats were not eye-popping in the box score, he managed to finish with six points, five rebounds, and four assists all within 30 minutes of playing time. Hayward remained out for a majority of the playoffs after suffering a Grade 3 ankle sprain in Game 1 against the 76ers.

However, a victory for the Heat tonight would skyrocket their chances to win the series and clinch an appearance to the NBA Finals for the first time since 2014. Moreover, if Boston manages to even the playing field by tying the series up 2-2, they could prolong their season to a six or seventh game. This game is vital for Miami as it can make or break the intensity of the series moving forward.

Giving Credit Where Credit is Due

Miami head coach Erik Spoelstra gave props to the Celtics as both teams pursue the same end goal. Spoelstra added this during the post-game:

“As much as you want to say it’s just about us, we just have to do XY and Z, the Boston Celtics have something to say about that… both teams are getting challenged and tested the way you should be in a conference finals.”

With the Celtics talented roster back at full strength, Spoelstra stated how the team needs to play better basketball in order to defeat Boston while they’re at their best.

The Heat have numerous areas to clean up in multiple aspects of their game. So far, Miami has started games slow and have struggled to close quarters early on. In the last two games, the team has headed into halftime trailing with a double-digit deficit.

After allowing the Celtics to feast for 60 points coming from the paint, the Heat need to tighten up their defense within the key. Lastly, it is essential for Miami to take advantage when the Celtics play their bench on the floor. The Heat are a deeper overall team, however; they’ve allowed the Celtics to make too much of a difference coming off the bench which eliminates their advantage.

The Heat-Celtics contest will tip-off at 8:30 p.m. tonight on ESPN. Both clubs will keep competing with one another as they each continue their pursuit to the NBA Finals.

Angel is a student at the University of Florida. She is a Multimedia Journalist who is currently a Sports Reporter and Writer at ESPN Gainesville. Follow her on Twitter (@angelcwells) and Instagram (@angel_wells). Be sure to follow her NFL Twitter account to stay up to date with the latest NFL news. (@UpToDate1NFL)
@angelcwells
Previous Marco Wilson Looks Toward Season
Next Kyle Trask ready for football to start