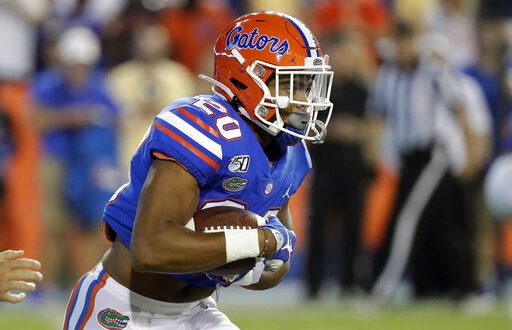 After multiple seasons plagued with injury, redshirt junior running back, Malik Davis is ready to show everyone what he can do.

Davis’ freshman campaign started out like a dream. He appeared in seven games and started two, racking up 526 yards on 79 carries and two touchdowns. He became the first true freshman in the SEC to have two rushing touchdowns in a game and became the 17th Gator true freshman since 1955 to rush for over 100 yards in a game. Barely halfway through the 2017 season, Davis had begun to make a name for himself.

Then it all came crashing down.

On Oct. 28, 2017, Davis and the Gators had their annual game against Georgia in Jacksonville. When he went to catch a 6-yard pass in the first quarter, he did not know it would be his last play of the season.

Davis suffered a season-ending knee injury, making his 2017 come to a screeching halt.

Davis’ next two seasons as a Gator did not turn out much better.

With a new head coach in place for 2018, Dan Mullen, Davis was ready to get back to football. However, just three games in, the 2018 season would come to an even sooner end when Davis broke his foot ending this season early as well.

And while Davis remained uninjured in the 2019 season, his previous injuries kept him from making the explosive return he was hoping for.

Davis’ injuries took a toll physically as well as mentally. He had to stand on the sidelines and watch as La’Mical Perine and Dameon Pierce received most of the carries. Davis still appeared in 12 games in the 2019 season, but his time with the ball was limited, tallying just 86 yards on 34 carries and scoring once.

With the COVID-19 pandemic, the 2020 season almost didn’t happen for Davis as well. However, Davis only had one thing on his mind and that was to keep working.

While the 2020 season is already drastically different from any other, Davis is hoping it will be different for him as well.

Davis is ready to return and prove he can compete at the level he was before his initial injury. He has added on 10 pounds of muscle this offseason after working with the Gators’ strength and conditioning coach Nick Savage as much as he could through the pandemic.

Now back at full strength, Davis will join Pierce, Miami transfer Lorenzo Lingard and redshirt freshman Nay’Quan Wright in the Florida backfield. And while it will be a challenge to get touches, Davis has proven he can handle anything.

And while this season may be unlike any other, Davis is just ready to be back with his teammates on the field.

The Gators will face the Rebels on Saturday, Sept. 26 at noon.

However long and hard the road may have been, nothing has deterred Davis from getting back to where he needs to be to prove he can be the best. And while everyone has been waiting a long time for the 2020 season, Davis has been waiting even longer.