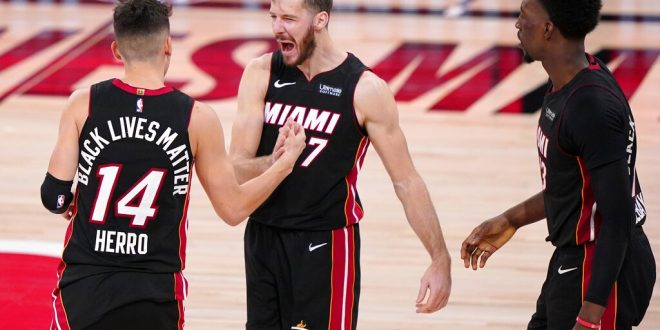 Miami only needs to win one more game to advance to the NBA Finals.

Behind 37 points from Tyler Herro, the Heat defeated the Boston Celtics 112-109 on Wednesday night. The win puts Miami at a 3-1 series lead, and 11-2 in postseason play.

Herro, at 20 years old, is the second-youngest player in NBA history to score 35 points in a playoff game. He also broke a Miami Heat record for most points scored in a playoff game by a rookie.

For Boston, Jayson Tatum led the team in scoring with 28 points and grabbed nine rebounds. Marcus Smart had a double-double, with 10 points and 11 assists. Both Kemba Walker and Jaylen Brown eclipsed at least 20 points for the Celtics in the loss. Boston as a whole committed 19 turnovers, more than double Miami’s eight turnovers.

Unfortunately for the Celtics, the Heat’s scoring surge did not come from a starter. Herro exploded with 17 fourth-quarter points to lift the Heat into a 3-1 lead in the series.

Brad Stevens on Tyler Herro: “The rim must have looked like the ocean to him.”

Despite the onslaught of points from Herro, he was statistically a net negative for his team. His plus/minus rating, which measures a player’s impact on the game, was -4. Still, Herro’s 37 points combined with Butler, Dragic and Adebayo’s combined 66 points were more than enough to put the Celtics away.

The Heat will play game 5 of the Eastern Conference Finals against Boston on Friday, Sept. 25 at 8:20 p.m. If Miami wins, they will advance to the team’s first NBA Finals appearance since LeBron James was on the team in 2014.

Steven Walker is a beat writer for ESPN Gainesville and is currently studying Journalism & Sports Media at the University of Florida.
@swalker_7
Previous Malik Davis’ Path to the Top
Next Stamkos Returns, Lightning Take 2-1 Lead