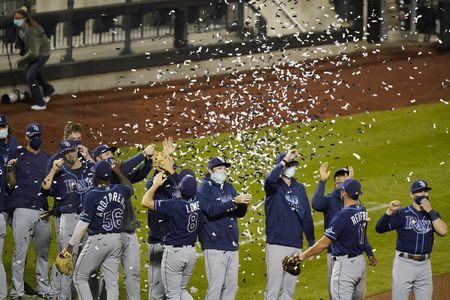 Last night’s win improved the Rays’ record to 37-20 on the season, which currently leads the American League.

For the first time since 2010, your Tampa Bay Rays are AL East Champions! pic.twitter.com/n2YagBWBZ9

Holding onto a two-game advantage with only three games left in the regular season, the Rays are in a good position to earn the top seed in the AL. As the number one seed, the Rays would likely face the projected eight seed, Toronto Blue Jays, in a best-of-three series.

The division rivals met ten times during the shortened regular season, and the Rays won the season series, 6-4.

Despite ranking 20th in team batting average, the Rays rank inside the top-10 in runs scored this season. Second-baseman Brandon Lowe leads the team in nearly every batting statistic including hits, home runs, RBIs and batting average.

Aside from Lowe, the Rays boast a true team effort. A whopping 14 different players have double-digit RBIs this season.

In terms of pitching, the Rays have been tremendous on the hill this year. Tampa Bay ranks top-5 in both team and bullpen ERA.

Starting pitchers, Tyler Glasnow and Blake Snell combine for a 9-3 record and over 150 strikeouts across just 107.1 innings pitched. ESPN baseball analyst Tim Kurkjian said when Glasnow and Snell are on, they are both “so so good.” Add recently injured Charlie Morton back into the rotation, and teams will likely struggle facing the Rays’ depth in October.

The Rays’ bullpen, too, deserves credit for the team’s success on the mound. Led by closer, Nick Anderson, the Rays lead the league with 21 saves. Anderson accounts for six off those saves and holds an astonishing 0.59 ERA to go with a 0.46 WHIP.

Despite familiar postseason faces like the Yankees and Indians, the Rays may have an unusual advantage this year given the circumstances with no fans.

“Maybe in this strange season without your home fans cheering you on in theory…that might not bother [the Rays] like some other teams,” Kurkjian said. This could be a valid point given Tampa Bay averaged the second-lowest attendance numbers in the league last year.

Regardless, Kurkjian “[likes] their chances to go to the World Series, that’s how good they are.” The Rays close the season this weekend with a three-game homestand versus the playoff-hopeful Philadelphia Phillies.

Hello, I am currently a junior at UF studying sports media journalism with a concentration in Political Science. I contribute web and radio content weekly for WRUF ESPN Gainesville. Be sure to check out some of my recent articles!
Previous No. 8 Auburn Tigers kick off season opener against No. 23 Kentucky Wildcats
Next Nuggets Look to Even Series Against Lakers Tonight