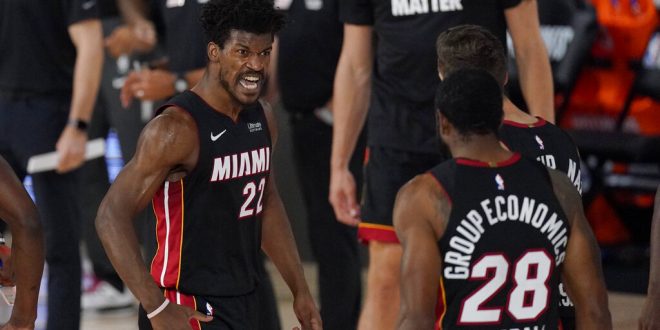 Miami Heat are underdogs in the NBA Finals

The Miami Heat take on Lebron James and the Los Angeles Lakers in a best-of-seven finals. The first game is at 9 p.m. Wednesday. It will be a showdown of underdog versus giant.

The Miami Heat are making their sixth finals appearance in franchise history, with the most recent appearance being in 2014. However, this is the first time the red and black are entering as the underdog. They take on the Lakers who have two of the best players in the league: Lebron James and Anthony Davis. The Lakers are the favorites to win the championship and are favored five points in Game 1. This teamin stomps onto the court like a giant looking to overpower the Heat. They have missed the playoffs three of the five past years, and they were not projected to make it this far, while the Lakers were.

Miami’s Jimmy Butler does not like this outlook. He doesn’t see his team as a “David,” taking on “Goliath.” No one may have picked them to be playing in the finals, but Butler wants to prove them wrong.

Jimmy Butler. Lebron James. What do these two have in common? They both have to utmost confidence in their team. Butler has had faith in his team that they would be here despite the 75-to-1 odds to win the title. James has confidence that the Lakers will bring home the trophy.

Some have speculated as to whether James should retire. Although he comes in at 35 years old, just like Tom Brady, Lebron James is not going anywhere yet. Jimmy Butler commented on Lebron James’ ability saying that he is still “at the top of his game.”

Against all odds, the Heat are in. Many counted them out, but nonetheless, they made it. Slovenian Goran Dragic told media that there was one reason why he came to Miami: to win.

The key to keeping the Lakers at bay is to match them. Not allowing easy lay-ups and staying with them step-for-step is what Bam Adebayo believes will give Miami the edge.

Previous Kyle Pitts: From Florida to TE1 in the NFL Draft
Next Grimes Talks Decision to Return, Explosive Offense