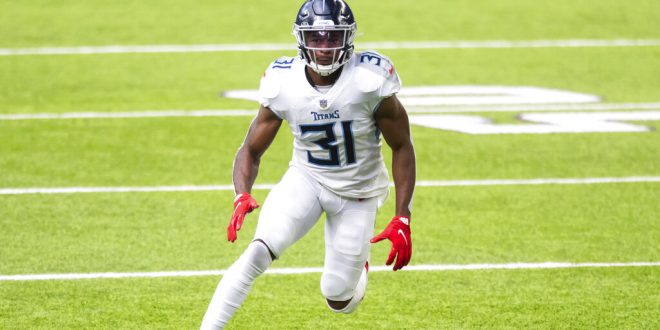 Tennessee Titans safety Kevin Byard (31) is shown in action in the third quarter during an NFL football game against the Minnesota Vikings, Sunday, Sept. 27, 2020, in Minneapolis. The NFL's ranks of undefeated teams should thin by one Tuesday night, Oct. 13, 2020, when the Buffalo Bills and Tennessee Titans finally meet in a rescheduled game. (AP Photo/David Berding, File)

After an unexpected week off, the Tennessee Titans are back in action.

The Titans (3-0) will host the Buffalo Bills (4-0) on Tuesday (7 p.m. ET, CBS) and, yes, the game is happening as both teams got the green light to play, according to ESPN’s Dan Graziano.

Excitement aside, head coach Mike Vrabel is ready to put his team in the position to win after grappling with the Titans’ internal outbreak of the virus last week.

The two teams did not face-off, as scheduled, on Sunday, Oct. 11. After 24 members of the Titans organization tested positive for COVID-19, the NFL postponed the game two days.

The BUF vs. TEN game will be just the second time in 70 years that the NFL will have a game on Tuesday. A rare treat for football fans.

The last NFL game played on a Tuesday Night was December 28th of 2010 between the Philadelphia Eagles and Minnesota Vikings.

A Battle Between The Unbeatens

The Titans last played Sept. 27 against the Vikings. Tennessee won the game in Minnesota 31-30.

Carrying a perfect record into the matchup, Tennessee will look to remain undefeated against the visiting, and also undefeated, Buffalo Bills.

The Bills, who currently hold first place in the AFC East division, emerged from the NFL’s first quarter unscathed largely because of their dominant roster.

Led by early MVP candidate Josh Allen, Buffalo appears to have one of the best offenses in the league. The team ranks fourth in total yards, fifth in points, and fifth in efficiency, per Football Outsiders’ DVOA.

With a win on Sunday, the Bills would secure their first 5-0 start since 1991.

Illnesses and all, Tuesday Night Football is on.