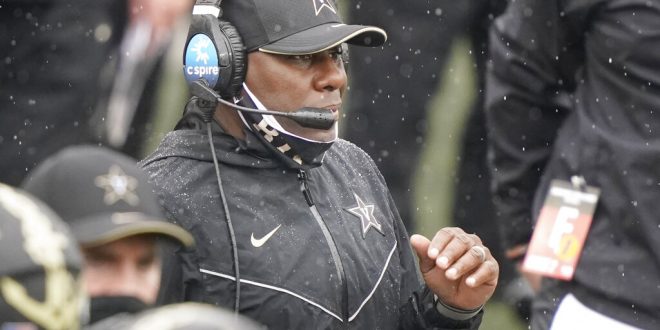 Vanderbilt head coach Derek Mason watches from the sideline in the first half of an NCAA college football game against South Carolina Saturday, Oct. 10, 2020, in Nashville, Tenn. (AP Photo/Mark Humphrey)

Vanderbilt head coach Derek Mason and the Commodores were unable to meet the 53 man roster minimum in their now postponed meeting with the Missouri Tigers.

The SEC announced Monday that Saturday’s Vanderbilt-Missouri matchup will be postponed due to the influx of positive cases on the roster.

The Commodores dropped below the SEC’s 53 roster minimum requirement, causing the cancellation.

NEWS: The Vanderbilt at Missouri FB game of Oct. 17 is postponed due to positive tests & subsequent quarantine of individuals within the Vanderbilt FB program. The action is consistent with SEC COVID-19 management requirements. The game is tentatively rescheduled for Dec. 12.

This is the first SEC game to be postponed during the 2020 season and is rescheduled for Dec. 12.

The team kicked off Week 1 against Texas A&M with a 12-17 defeat, then went up against LSU and South Carolina for Weeks 2 and 3 and fell short 7-41 for both.

During Monday’s press conference, Mason revealed a positive test result for safety Donovan Kaufman. Kaufman missed the South Carolina game, along with other players such as linebacker Alston Orji and cornerback Randall Haynie. Mason didn’t specifically reveal why the other players missed the game, but did suggest it was COVID-19 related.

Vanderbilt has been strict on COVID-19 testing, as well as who they permit into the stadium. Students are the only fans permitted during home games. Vanderbilt’s two home games this season were against LSU and South Carolina. Vanderbilt students undergo weekly testing.

“In looking at it, we had some concerns yesterday evening knowing exactly where we sat. We talked with our athletic director, our medical staff as well as the league this morning to confirm exactly where we were, and in doing so made the best possible decision for the health, safety and welfare of our student-athletes. That’s paramount in this. We want to play football, we want to be competitive, we want to have a chance to win in these times. But we also have to look at the data and what the data tells us, and our safety protocols that are in place within the conference speaks to the idea of having available players at a minimum number. This week was a challenge to do so. Just talking with our people, we moved forward and that’s where we sit now.”

Mason believes that postponing the game was the right call.

Between the players out on injury or COVID-19 protocol, they did not have enough to play this week.

The Commodores already had an off week scheduled for Oct. 24, so they’ll have time to recoup before the Ole Miss matchup on the Oct. 31.