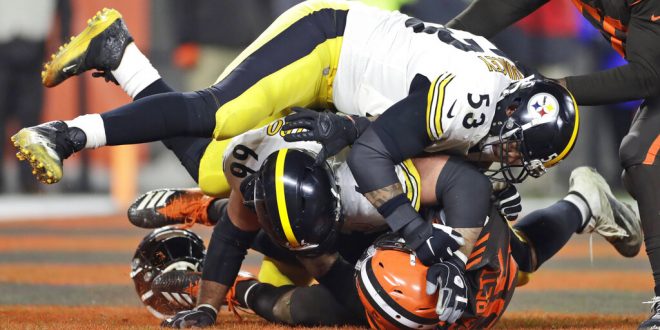 In the NFL, two top-notch teams battle it out as both teams attempt to sit at number one at the top of the AFC North.

The Cleveland Browns (4-1) are on the road up against the Pittsburgh Steelers( 4-0).

The Cleveland Browns enter this matchup with an impressive 32-23 win against Indianapolis Colts. The Browns have won four straight games in the AFC North being tied for second with the Baltimore Ravens.

Cleveland prepares for Sunday’s game with a big question mark on their roster: will their star quarterback, Baker Mayfield, suit up against the Steelers? Mayfield took a shot to the chest against the Colts last weekend that left him chest pain and sore ribs. There are also six other players that join Mayfield that are questionable for Sunday’s matchup.

Questionable Injury Report for the Browns

The main focus going into this game for this Browns team is to slow down the Steelers passing game. The Browns are (21-46) against the Steelers on the road and have not beaten Pittsburgh in their home arena since 2003.

The Steelers come into this matchup undefeated, sitting atop of the AFC North Conference (4-0) record. Pittsburgh attained a 38-29 victory over the Philadelphia Eagles last Sunday in week five of the NFL season.

Pittsburgh stands at the number one spot in rushing touchdowns, led by quarterback Ben Roethlisberger who has made his return this season leading his team to a perfect 4-0 start. Chase Claypool another great piece to this Steelers roster, adding to this team’s achievements.

Having an out outstanding game against the Eagles performing for seven catches on 11 targets for 110 yards and three touchdowns.

The Steelers lead the all-time lead the series against Cleveland Browns  (74-59-1).

Kickoff for this matchup is Sunday, at 4:30 p.m. in the Heinz Field stadium.