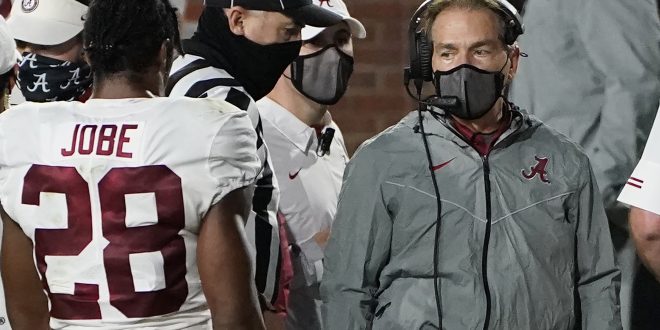 Saban Out For Saturday’s Game

Alabama Head Coach Nick Saban and Athletic Director Greg Bryne both tested positive for COVID-19 this past Wednesday. The positive tests could not have occurred at a worse time for No. 2 Alabama. They host No. 3 Georgia this Saturday.

Alabama Goes To Battle Without Saban

This Saturday, Saban will not be on the sidelines or anywhere in the stadium for arguably the biggest game of the season. In addition, he will have no communication with coaches or players. Like most of us, Saban will be watching his team compete on TV.

According to NCAA rules, voice communications must remain between the press box and the team area. Also, the rule prohibits the use of any other technology for virtual communication within the game.

FOX Reporter Jonathan Hardison tweeted that, “NCAA rules prohibit Coach Saban from communicating with the team or coaches from home from 90 minutes before kickoff until after the game is over.”

This week, Saban has continued his typical game-day preparation and routines but via zoom. As far as gameday goes, the head coach baton is being passed to the offensive coordinator. According to ESPN Reporter Tom Rinaldi, “Steev Sarkisian essentially elevates to the head coaching position.”

Saban has reported being asymptomatic. However, he will need three consecutive negative tests in order to return to facilities according to the Return-To-Play protocol.

“Obviously this will be very important to the viability of this game Saturday night,” Rinaldi said.

The answer to how players will fare without Saban’s involvement is unpredictable. ESPN College Football Analyst David Pollack explained that Saban is an integral piece of Alabama’s well-being.

“There’s a lot of coaches that are CEOs, Nick Saban ain’t one of them. This dude is integrally involved in everything that’s going on,” said Pollack.

Despite the chaos, No. 2 Alabama will host No. 3 Georgia this Saturday at 8 p.m.

Parker Welch is a Senior at the University of Florida majoring in Sports Media at the College of Journalism & Communications.
@parkerrwelch
Previous Wildcats Stay Undefeated After Sweeping the Hurricanes in the Volleyball District Championship Match
Next Braves Within a win of the World Series