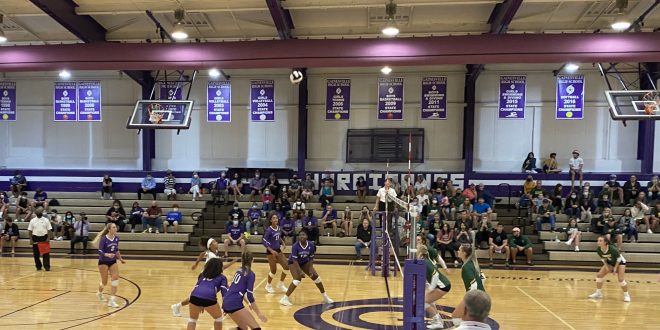 The Gainesville Hurricanes (11-7) hosted the Forest Wildcats (14-0) in the Class 6A Girls Volleyball District Championship match.

The Hurricanes gave it their all, but the Wildcats offense came out on top, winning the district title.

The energy in the Purple Palace was electrifying before the match began. The crowd was stomping their feet, clapping their hands, and screaming at the top of their lungs. Each team had their fair share of “Go Canes” or “Go Wildcats” chants, hyping up the girls up on the court. Both teams have gone through a lot in their journies to making it to the District Championship match. Wildcats Head Coach Jimmy Collins explained how the new guidelines surrounding Coronavirus had limited what opponents his team was able to play during the regular season.

“We came into the District Tournament with a lot of unknowns because…we only were allowed to play county public schools in the regular season. We couldn’t play any of the Gainesville schools or travel to tournaments or anything, so the two most difficult games that we faced this entire season had been these two games in the district tournament with Buchholz first and then [Gainesville] tonight,” said Collins.

In a previous interview and article, Hurricanes Head Coach Chancie Vice has explained how her team has had to adjust on the fly and overcome multiple injuries during their regular season.

The girls on the court had determination, drive and desire to win the District Championship title. Each and every player played each set with a fiery passion for the game.

Wildcats Break the Tie and Win the First Set

The match began with the Wildcats serving the ball. The Wildcats and Hurricanes took turns taking the lead. In the first set alone, both teams had strong offensive plays. Wildcats captain and junior outside hitter Emma Truluck had a total of nine attacks and six kills. Freshman outside hitter and middle blocker Brooklyn Tealer had a total of four kills. The crowd was on the edge of their seats, wondering who would take the lead in this seesaw like set.

The tone soon shifted in the Wildcat’s favor. Junior opposite hitter and outside hitter Abby Eckenroth scored with a kill, breaking the 14-14 tie. Her teammate, junior outside hitter and defensive specialist Emma Santi, followed up with a second kill. This advanced the Wildcats lead 17-15. The Hurricanes tried to regain the lead with kills by sophomore outside hitter Jasmine Verbust and senior middle blocker Jayden Tompkins. Unfortunately, they fell short and the Wildcats won the first set 25-18.

Gainesville had a strong start in the second set. It began with an ace by senior setter Morgan Spear and a kill by Verbust. The Wildcats responded, with one kill each from Truluck and Eckenroth. Tealer continued to dominate the Hurricanes offense with three more kills and one hit in the second set.

Brooklyn Tealer (#11) scores for the Hurricanes with a kill in the second set. (Video from Kaitlyn Wadulack).

Again, the Wildcats took control of the set after the Hurricanes suffered a double hit violation and two out-of-bound plays. Truluck led the Wildcats to a six-point lead after scoring with three more kills and an ace. The Hurricane’s defense did not let this last. Freshman libero Meme Davis dug deep and threw herself onto the court. She saved the ball with multiple digs and helping make set-ups for her offense. Additionally, two blocks by sophomore middle blocker Ta’Niya Walker prevented the Wildcats from completely taking over the set.

Even with this valiant effort from the Hurricane’s defense, they couldn’t stop the strong offensive plays made by the Wildcats. The Wildcats won the second set, 25-19.

As with the two prior sets, it was a back-and-forth game. The Wildcats took the early lead after a kill and an ace by Truluck and a block by freshman setter Mackenzie Danner. After a Gainesville timeout, however, the Hurricanes momentum increased. They were able to take the lead with two kills and two hits by Verbust and two more kills and one hit from Tealer. The score was 17-14 Hurricanes.

Coach Collins called a timeout for his team, which was the turning point of the set. The crowd was feeding off of one another, cheering and making as much noise as they possibly could. This was Gainesville’s chance to extend the match to a fourth set, and everyone attending the game knew it. The Wildcats came back from their timeout, scoring with a kill from Truluck. After a few more rallies, the score was tied 19-19.

The seesaw was back, leaning in both teams’ directions. A hit by Tealer gave Gainesville the initial point lead. Like a seesaw, however, the balance shifted back to the Wildcats after three missed hits by the Hurricanes. At 22-20, Coach Vice called a timeout for the Hurricanes. Murmurs were heard throughout the crowd during this period of no play: “This is their chance,” “they still have a shot,” “the Wildcats could win it in three rallies.” The tension was high, and everyone in the Purple Palace could feel it.

With play resumed, the Wildcats came out with a kill by Santi. The Hurricanes hit the ball out of bounds, now leaving the score 24-20 Wildcats. This wasn’t the last of the Hurricanes. They fought to the very end with a kill and an ace by Davis and a missed hit by the Wildcats. The score was 24-23. At set-point, the Hurricanes served the ball, but to no luck, it went out of bounds. The Wildcats won the third set 25-23 and were the Class 6A Girls Volleyball District Champions.

@ForestHighVB wins the third set against the @GHSHurricanes volleyball 25-23, making them the Class 6A Girls Volleyball District Champions@ESPNGainesville

After all the unknowns of what this volleyball season would hold, Coach Collins is proud of what his team has accomplished so far this season.

“I am really proud of how these girls handled the pressure in the district tournament, really facing pressure situations for the first time….This team is special. The team chemistry is just awesome. They really care about each other and put their team first, so it’s just a blessing for me to be able to coach this team,” said Collins.

With the district title under their belt, the Wildcats journey continues as they begin preparations for regionals next week.

“You know, as soon as we celebrated, my captain Emma Truluck stepped up and said ‘listen, the real season starts now. We work harder than ever at practice on Monday.’ That set the tone….our philosophy is every day we get better. We find a way to get better, and this team really wants to do that,” said Collins.

As for the Hurricanes, Coach Vice is proud of the way her team fought to the very end of this match.

“They played as relentlessly as possible…they executed well, the effort was there, our service-receive was phenomenal. My libero Demetria [Meme] Davis played amazing, lights out, couldn’t have asked for more out of her. All around, the team effort was there one hundred percent, but we just got beat by the smarter team in my opinion,” said Vice.

Kaitlyn Wadulack is a second-year Journalism student specializing in Sports and Media at the University of Florida. You can reach Kaitlyn at k.wadulack@ufl.edu.
Previous Correa Walks Off, Astros Force Game 6
Next Saban Out For Saturday’s Game