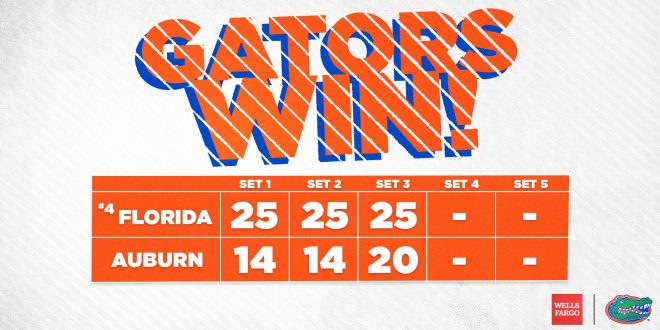 The No. 4 Florida Gators opened the fall portion of their season on the road with a 3-0 win at Auburn.

The Gator volleyball squad picked up where they left off last season; dominating the court. With this win, they have now won 28 season openers and four-straight.

Georgia Transfer T’ara Ceasar led the way in her first game in orange and blue. Ceasar racked up 11 kills, five blocks and an ace in her debut performance.

Junior outside hitter Thayer Hall was right behind with nine kills and six digs. Marlie Monserez also doled out 29 assists on the night and had a kill of her own.

Haley Warner also went five for five on attacks, earning herself a perfect attacking percentage. All of Warner’s five kills were recorded in the third set. She also recorded a team-high 11 digs, notching her first double-double of the year.

The second set started similarly, going back and forth. Florida then went on an 11-4 run, causing an Auburn timeout, but Florida continued to push forward. Auburn was able to hold off three Florida set points, but Hall claimed another win for the Gators.

The third set was much closer as the two teams went back and forth. The set was tied at 12, but the Gators battled ahead to 15-14 at the media timeout. Out of the break, Florida went on a 5-2 run, but Auburn pulled back within three at 22-19. However, after two Ceasar kills and two service errors from Auburn, the Gators secured the win.

The Gators will stay in Auburn for the second game of their doubleheader Thursday night at 8 p.m. on ESPNU.