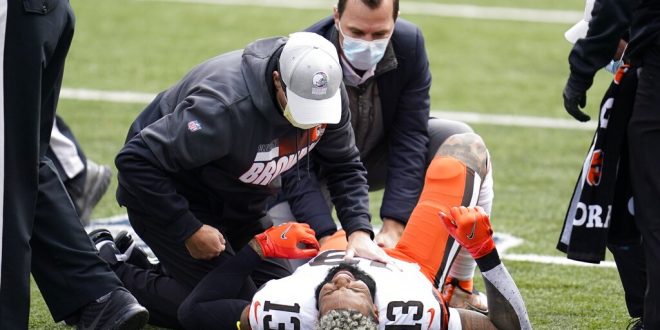 Cleveland Browns' Odell Beckham Jr. (13) is examined during the first half of an NFL football game against the Cincinnati Bengals, Sunday, Oct. 25, 2020, in Cincinnati. Browns star wide receiver Odell Beckham Jr. will miss the rest of the season after tearing a knee ligament during Sunday's 37-34 win at Cincinnati. (AP Photo/Michael Conroy)

Odell Beckham Jr. is done for the season, but the Cleveland Browns are not.

The star wide receiver tore his ACL attempting to make a tackle after quarterback Baker Mayfield threw an interception. At halftime, Beckham Jr. told Mayfield to go win the game in the second half. Mayfield did just that, coming out and throwing three touchdowns to win the game 37-34.

Beckham Jr. is one of the top receivers in the league. He is at nearly 7,000 yards receiving in his career and had over 1,000 yards last year. Head coach Kevin Stefanski shared his thoughts with the media on Beckham Jr.

Indeed, Beckham Jr. brings a lot of energy. He is the team’s leading receiver and the numbers he puts up will make him difficult to replace. Stefanski made the point that it will take more than just one player to replace him and make up for his missing presence.

After the injury, players from across the league offered support for Beckham Jr. over social media. Jamal Adams and Larry Fitzgerald being a few of them.

Sending Prayers up for you #3 @obj

Mayfield threw the interception that led to the injury and now he feels responsible for what happened to his teammate.

Odell Beckham Jr. limped to the locker room trying to make the tackle

It was an unfortunate injury that could have happened to anyone on any tackle. Stefanski stressed that no one is at fault here.

Despite the blow to the team, Mayfield and the other receivers were able to get the win. After the game, Mayfield shared his thoughts on social media.

Jarvis Landry, fellow Browns wideout and former teammate with Beckham Jr. at LSU, voiced his feelings on social media as well. “My heart hurt,” he said on Instagram Monday morning.

Despite the loss of Beckham Jr., the season must continue without him. Stefanski said they will be looking to the other receivers to step up in his stead as they did on Sunday.

The expectations do not change for the Browns moving forward this season. No matter who they lose, Stefanski expects them to play at the highest level.

The Browns will face the Raiders this coming Sunday and will have to adjust accordingly on offense to get the win. For now, they will be looking to others to shine in Beckham Jr.’s place. But, this could be a chance for someone else to have a breakout season.

Perhaps in the wake of unfortunate events, the Browns can find another hero in Beckham Jr.’s absence.