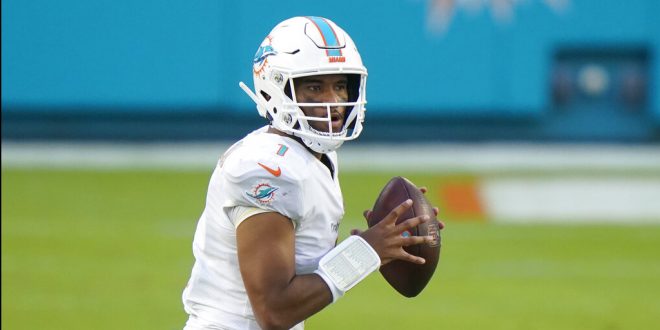 Tua Tagovailoa made his highly anticipated debut Sunday at quarterback for the Miami Dolphins against the Los Angeles Rams. But it was the Dolphins’ defense and special teams that made the difference in Miami’s 28-17 win.

The Los Angeles defense quickly greeted Tagovailoa to the NFL. On Miami’s second play from scrimmage, Aaron Donald strip-sacked him and the Rams recovered the fumble. Tagovailoa said he embraced the moment after the game.

Later in the first quarter, Dolphins coach Brian Flores threw a wrinkle into his defense. Second-year defensive tackle Christian Wilkins dropped back into coverage and picked off Jared Goff.

It set the table for Tagovailoa. He threaded his first career touchdown pass on a goal-line quick slant to Devante Parker that tied the game.

Then, the second quarter happened.

With the Dolphins pinned at their own three-yard line, Myles Gaskin had the ball punched out. The Rams gained possession inside the Miami 10.

Los Angeles stalled out on its following possession. All of a sudden, Jakeem Grant turned on the burners and returned a punt 88 yards — the longest punt return in Dolphin history. It increased the Miami lead to 21-7.

The Miami defense continued to terrorize Goff. Another strip sack set up a Gaskin touchdown. Despite throwing for more than 350 yards Sunday, Goff tossed two interceptions and had several passes batted down at the line of scrimmage.

Tagovailoa faces another tough NFC West team next Sunday in his second start. Miami (4-3) travels to Arizona to face Kyler Murray and the Cardinals (5-2). Tagovailoa said he has room for improvement in the Dolphins’ offense.

Meanwhile, Los Angeles (5-3) will try to get back on track against divisional rival Seattle (6-1). The Seahawks’ only loss was in overtime against the Cardinals in Week 7.