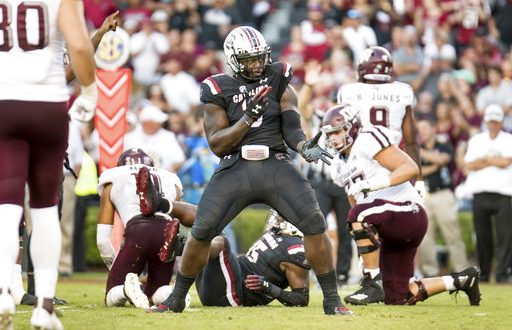 We got an SEC matchup this weekend as the seven-ranked Texas A&M hit the road to play the South Carolina Gamecocks.

South Carolina begins the second half of its season, as the Gamecocks prepare for their battle against the Aggies coming off a bye week last weekend.

Struggling offensively, prior to this matchup, the Gamecocks enters this weekend with a loss against LSU. The Gamecocks could not figure it out against the Tigers defense, as LSU took South Carolina down 52-24.

The Gamecocks have struggled to against the Aggies for many season  beginning when Texas A&M entered the SEC division in 2012-13 year.

This will be the seventh time these two teams have met. The first meeting between the two was in 2014, where the Aggies posted a 52-28 win over the Gamecocks. Since then, South Carolina has yet to defeat Texas A&M.

South Carolina was able to upset a ranked team this season as they took down the 24-ranked Auburn 30-22.

UPDATE: Saturday’s game will officially kick off at 7:00PM ET!

See you under the lights! pic.twitter.com/yRTMz4wzWi

Texas A&M enters this game with an impressive record for their season, sitting at 4-1 overall and also being ranked seventh in country. Prior to this win, the Aggies took down Arkansa 42-31.

This match up between these two teams can easily come down to a run game being that the Gamecocks also have a player that sits at number two in the SEC for rushing yards Kevin Harris who has completed 535 yards for the season.

Kick off for this SEC match is set for Saturday in the Williams-Brice Stadium at 7 p.m.