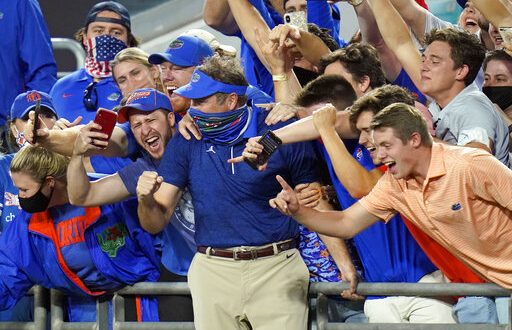 After a letting the team celebrate briefly, head coach Dan Mullen wants to ensure his Gator football team is focusing on their next task at hand. That next task happens to be a familiar player in former Gator Feleipe Franks and the Arkansas Razorbacks.

Some are calling Florida’s victory over Georgia this past weekend a “program-changing” victory. After three consecutive losses to their cross-state rival, Mullen’s Gators beat Georgia by a convincing score of 44-28. The program-changing portion of the win comes from possible recruits, players and coaches buying in to what Dan Mullen has been preaching since his arrival in Gainesville. For the first time in the Mullen era, the Gators beat the Bulldogs and are on track to play in the SEC Championship game.

However, Mullen does not want his players too celebrate too much as there is much still to play for. The Gators have had a handful of key victories in recent years but have not made it to Atlanta. Mullen is ensuring his team is focused on the end goals they set out at the beginning of the season.

To get there, Mullen wants his team to keep improving. Beating the statistically best defense, which averages 300 yards against per game, by doubling Georgia’s yards in the game is a great achievement. However, if the Gators want to be the best, they need to keep improving on their past weeks.

Riding the high of an emotional win can do well for a team’s confidence going forward. However, it also poses the threat of trap games against teams that should be beaten handedly. Perhaps nothing personifies that idea more than Florida’s upcoming game against Feleipe Franks and the Arkansas Razorbacks.

Last season, Franks started games in the orange and blue before dislocating his ankle against Kentucky. The season-ending injury opened the door for the Gators’ current starter, Kyle Trask. Franks, recognizing his window in Gainesville was closing, transferred to Arkansas, where he has led the Razorbacks to a (3-3) record with multiple SEC wins for Arkansas for the first time since 2016.

In his announcement that he would transfer, Franks said “once a Gator, always a Gator.” That adage may prove false for a few hours on Saturday night when he once again plays in Ben Hill Griffin Stadium, only this time wearing the cardinal and white.

Franks’ success in Fayetteville is not a surprise to some. Mullen says he recognized Franks’ talent when he was the starting quarterback for the Gators, and he melded perfectly with head coach Sam Pittman’s formula for success.

According to Mullen, Franks still stays in touch with some of his former Gator teammates as well as Mullen and his wife Megan. That connection might give both sides a little edge coming into the game.

For Arkansas, they may not have the coaching prowess of first-year head coach Sam Pittman. Pittman tested positive for COVID-19 on Monday, and he is isolating with no symptoms. Barry Odom will serve as the interim-head coach in Pittman’s temporary absence. Pittman and Franks have Arkansas sitting at 3-3 in this abbreviated season. This is a vast improvement from their 1-23 SEC record over the previous three years.

The Gators and Razorbacks seldom meet; only 11 meetings all time including two meetings in the SEC Championship game (1995 and 2006). Florida boasts a 9-2 record in those 11 games, although Arkansas won the most recent game in 2016.

The Gators are comfortable favorites for Saturday night’s game (-17.5), but this could easily be a trap game for the now-No.6 Gators if they celebrate their win over Georgia too much. The game is set to kickoff at 7 p.m. barring any COVID-19 and tropical storm changes.

Originally from Seminole in the Tampa Bay area, Kyle is a contributor for ESPN Gainesville as well as local NPR and PBS affiliate WUFT. Kyle wants to get into sports with a lofty dream of being a sports broadcaster. He was raised playing soccer and baseball while watching hockey and football, so the knowledge about various sports is fairly extensive.
@KyleFanslerUF
Previous Chase Elliot Wins 2020 NASCAR Cup Series, Jimmie Johnson comments on Final Race
Next The Winless New York Jets take on the New England Patriots in Monday Night Football