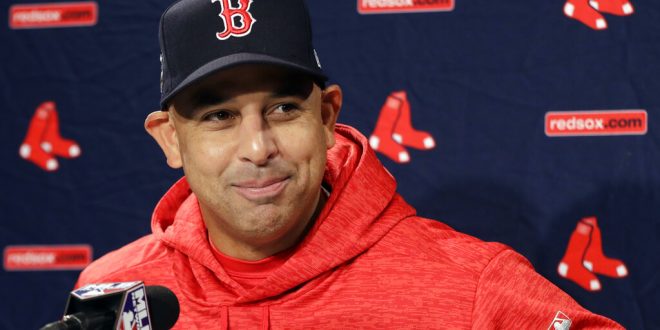 FILE- In this Oct. 21, 2018, file photo, Boston Red Sox manager Alex Cora speaks to media during a baseball work out at Fenway Park in Boston, as they prepare for the World Series against the Los Angeles Dodgers. The Red Sox rehired Cora as manager Friday, Nov. 6, 2020, less than a year after letting him go because of his role in the Houston Astros cheating scandal. (AP Photo/Elise Amendola, FIle)

Alex Cora is back in Boston. The Red Sox rehired their former manager on Friday. The Detroit Tigers added AJ Hinch as their new manager. Now, you might remember those names, and probably in a negative light. Cora and Hinch were two of the coaches involved in the Houston Astros sign stealing scandal in 2017.

Cora led the Red Sox to a title in 2018, mutually parting ways with the organization to serve his suspension. He and AJ Hinch were suspended after an investigation uncovered their controversial activity with the Astros in 2017.

Cora and Hinch continue to receive criticism for their stealing of signs in 2017. With the use of a center field camera feed, they decoded the catcher’s signs to give their hitters an advantage. Players in the dugout would beat trash cans to let the hitters know which pitch was coming.

Since then, the criticism continues. Now, people take to social media to share their opinions on the rehiring of the two.

Boston Happy to Welcome Cora Back

But not everyone is upset, Boston fans could not be happier. They think Cora is a great manager and baseball insider Buster Olney agrees. Olney believes the Red Sox had no choice and that Cora is a must hire.

Cora did lead the team to a title in 2018. Instead of struggling this season with a new hire, Boston might see an opportunity to get back to the top. They, along with their fans believe that Cora is ready to begin anew. Cora himself is remorseful and apologetic about his actions.

“I deserve what happened this year,” Cora tells the media about his suspension, “I want to make sure everybody knows that this situation is part of who I am, you know, for the rest of my career. As a man, I have to deal with it. I don’t want people to seem like it’s a great comeback story. I don’t want that.”

The #RedSox today announced that Alex Cora has been hired as the team’s manager. pic.twitter.com/dsE7J4lqfi

Olney adds that despite criticisms, there are players and peers in the industry that admire him. They respect his ability to lead as a manager.

AJ Hinch has found a new job in Detroit. The Tigers called him not even an hour after his suspension ended. He is also not proud of his actions and knows the general attitude around the league.

“I understand the question and I understand how wrong it was, and I’m sorry for that,” Hinch tells the media, “I’ve said that before, I’ll say it again, I’ll continue to say it.”

Ended the day with the best view. pic.twitter.com/YI8TPxQbBI

While the criticism continues, Olney stressed that both of these guys are two of the best managers in baseball. They might receive criticism but they are too good to not get rehired. It was only a matter of time.

Red Sox-Cora and Hinch Being Re-Hired

The rest of the league might not be happy about this. But, Boston and Detroit look forward with optimism as they begin new chapters this coming season.