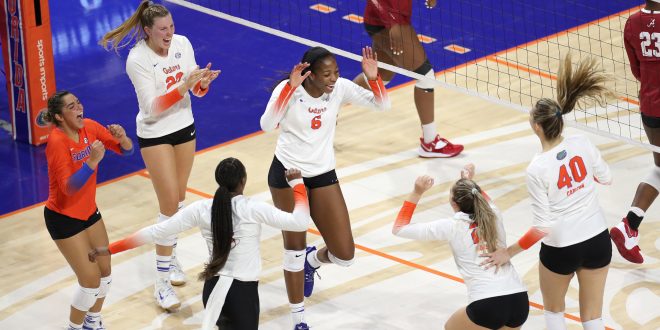 The No. 4 Florida Gators Volleyball team has done it again. Florida has not dropped a single set through their first six matches.

The Gators are now 5-0 on the season after winning the first match of their double header against South Carolina 3-0. This is the first time since 2006 that the Gators have started 5-0 without dropping a set.

To bring down the Gamecocks, Florida put on another defensive show. They held South Carolina to just a .114 clip. The Gators continue to rank first in the nation in opponent hitting percentage.

Thayer Hall led the Gator team with 13 kills and a .400 clip on the evening. Holly Carlton was right behind with 10 kills and a .500 clip.

Paula Cerame posted a career high in digs, with 19. The defense also came out to play with nine team blocks led by Lauren Dooley with five, Nnedi Okammor with four and Carlton with four.

In typical Gator fashion, the first two sets were dominated. Florida got started fast, beginning the first set on a 5-0 run. South Carolina came back within three, but the Gators managed to hold at least a five point lead for the majority of the set.

The Gamecocks pulled back within four after a 4-0 run, but the Gators pulled out the first set win 25-17.

The second set started back and forth and was tied at seven, before a 3-0 Gator run. The Gamecocks managed to pull within two at 13-11, but a 7-2 Gator run propelled them to win the set 25-17.

The third set was the closest by far, with South Carolina taking their first lead of the match at 15-13. The two teams traded points until a 5-0 Gator run. The Gamecocks pulled backahead at 22-21, but it wouldn’t be enough to hold off the Gators 4-0 run to win the set 25-22.

With this win, Florida moves to 59-7 all time against the Gamecocks. The Gators will stay in Columbia for the second match of their double header against South Carolina Thursday at 3 p.m. Coverage will be streamed on SEC Network+.