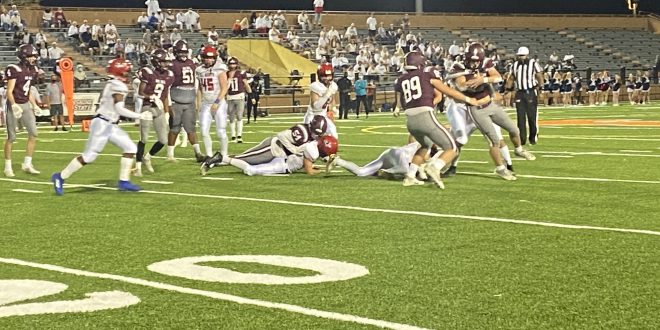 Junior Carter Coleman rushes for the Oak Hall Eagles. His touchdown in the fourth quarter tied the game for the Eagles in the state championship in Lakeland, Florida.

The Oak Hall Eagles faced a familiar foe in their final game of the year, a state championship held in Lakeland, Florida. They had cruised to nine wins on the year, yet there was one team that kept their bout close with the Eagles, and nearly gave them a loss. That team, the All Saints’ Academy Saints, was the team they had to take down once more to secure their state championship ring. In an epic rematch that came down to the final possession, the Eagles fell to the Saints, 22-14.

On the offensive side of the ball, both teams struggled out of the gate. The first three drives of the game ended with punts, and Eagles quarterback senior Andrew Pickens went down with an ankle injury. After wrapping it with tape, he managed to come back into the game. Despite the injury, Pickens refused to give any excuses for his play.

“I got rolled up on my ankle, but besides that, I played about as well as I could’ve,” Pickens said. “I’m just sad that we couldn’t come home with a ring.”

All Saints gets the first score of the game on this run from senior Andy Paul late in the second quarter. An extra-point block courtesy of Jalen Scott keeps the score at 6-0 Saints. @athletics_hall @OakHallFootball @ESPNGainesville pic.twitter.com/XykONmOWcn

It wasn’t until the second quarter when senior Andy Paul scrambled into the endzone to put the Saints up  6-0, a score that would hold through the remainder of the half. However, Eagles sophomore Jalen Scott made a big play by blocking the extra-point kick, a play that would keep Oak Hall alive later in the game.

“You gotta be quick, you gotta play to the whistle,” Scott said. “As soon as you see that ball snap, you snap out like a cannon and make a play.”

After a scoreless third quarter, Oak Hall needed an answer to stay alive in the final 15 minutes of their season. They found it in junior Carter Coleman, who gave them a rushing touchdown that tied the game at six after a failed 2-point conversion. However, Saints senior Zay Mathis ran for a touchdown on the very first play of their next drive, and scored yet again on the drive after that, putting All Saints’ ahead by 16 before the Eagles could blink.

Another touchdown for the Saints here late in the fourth quarter. @OakHallFootball now needs 16 to tie the game. @athletics_hall @ESPNGainesville pic.twitter.com/RGYgBffqKm

“We gave up some big plays to “1”  [Mathis], and that was really what we knew we couldn’t do,” Oak Hall Head Coach RJ Fuhr said. “He’s a great player, and he’s a home-run hitter, and unfortunately on both big runs, we had him. We had him in the backfield, and we just didn’t finish and he made us pay for it.”

@OakHallFootball isn’t done yet. Senior Andrew Pickens rushes in for a touchdown, and runs into the endzone again for the 2-point conversion. Eagles trail by 8 with 5:15 to go. @athletics_hall @ESPNGainesville pic.twitter.com/OCugXqaYuC

After the second touchdown from Mathis, a spark seemed to be set off in the Eagles’ offense. After appearing stagnant for stretches of the game, they marched all the way down the field and capped off their drive with a rushing touchdown from Pickens. A 2-point conversion, also from Pickens, brought Oak Hall within eight with five minutes to go.

“I couldn’t be more proud of them.”- RJ Fuhr

Oak Hall seemed to be primed to tie the game and potentially force overtime as they forced a three-and-out on defense, and got the ball back once again. However, after successfully getting into the red zone with minutes to go, Pickens threw an interception that clinched the game for the Saints and put an end to the Eagles historic season.

“I couldn’t be more proud of how we never gave up,” Fuhr said. “A lot of teams, especially as young as we are, would have quit after those two long runs but we didn’t. We had a chance to tie it up right there at the end. Our quarterback tried making a play, and it just didn’t happen.”

An interception in the redzone, and the ensuing knee’s from All Saints puts an end to @OakHallFootball’s season and their perfect record. Regardless of the outcome in Lakeland, the Eagles have a great season to hang their hats on. @athletics_hall @ESPNGainesville pic.twitter.com/pVna5PxNs6

After bringing his team to the pinnacle of success only to fall just short of the finish line, Pickens had to say goodbye to the team he had motivated, inspired, and led all year long. Despite not getting the result he wants, he still shows his love for his teammates after the game.

“I’ve gone here [Oak Hall] my whole life,” Pickens said. “These boys, my teammates, my classmates, they mean the world to me. I don’t know where I’d be without them, and I love them to death.”

“We’re very young, and we can be back here again. We’ve got 8th and 9th graders starting on both sides of the football.”- RJ Fuhr

With a young core of players returning next year, headlined by Scott and Coleman, the Oak Hall Eagles seem set up for continued success into the years to come. As for the players, they seem as confident as ever, despite the loss.

“You’re gonna see Oak Hall back here again,” Scott said. “Trust that. These coaches put their all into these kids, these kids buy into it, and we’re gonna be back here next year.”

Carson Cashion is a second-year student at the University of Florida, and has a major in journalism with a specialization in sports and media. Originally from the Orlando area, Cashion has covered the UF Gymnastics team as well as Oak Hall athletics for ESPN Gainesville.
Previous Trask Dominates as Gators Pounce Arkansas
Next Dustin Johnson rides record-breaking performance to Masters victory