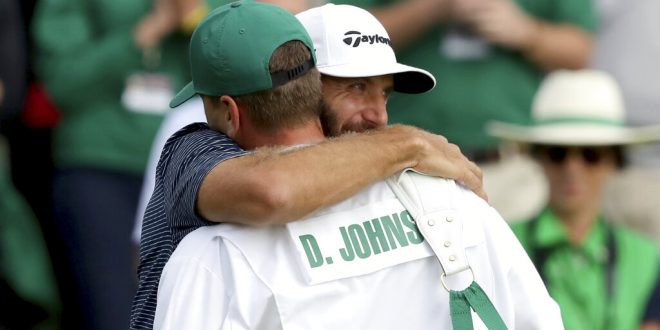 Dustin Johnson reacts with his brother and caddie Austin Johnson on the 18th green after winning the Masters golf tournament Sunday, Nov. 15, 2020, in Augusta, Ga. (Curtis Compton/Atlanta Journal-Constitution via AP)

Dustin Johnson never dreamed of winning the Masters in November amidst a global pandemic.

However, he had always dreamed of winning the tournament. He said it’s why he works so hard. And it’s why when his dream came true Sunday, he wiped away tears.

Johnson posted the lowest score in Masters history, 20 blow par, in his win. And he did it with his brother, Austin Johnson, by his side as his caddie.

In Sunday’s final round at the 84th Masters, Johnson said he was nervous because of tricky conditions at Augusta National Golf Club.

It didn’t matter. He finished the last round with a four-under 68.

His 20-under 268 set the record for the lowest score in tournament history. It broke Tiger Woods’ record set in 1997 by two strokes. Jordan Spieth also hit Woods’ mark in 2015.

Johnson matched two other tournament records. He had four bogeys in 72 holes and 12 greens missed over the course of the week, and the former was set by none other than Jack Nicklaus.

Also, his five-shot advantage made for the largest margin of victory at the Masters since Woods eclipsed everyone by 12 in ’97.

But the journey was far from easy for Johnson. His only major victory prior to this one was the US Open at Oakmont in 2016. Finally, he found himself back on top.

No one came that close to matching Johnson’s unprecedented result. Cameron Smith and Im Sung-jae came the closest. They posted identical scores in the final round and for the tournament: a three-under 68 and 15-under 268.

Meanwhile, tournament favorite and 2020 U.S. Open champion Bryson DeChambeau underperformed — he tied for 34th. Woods also struggled. He recorded a 10 on the 12th hole in the final round — his worst score on a hole in his career.

However, Woods put on a big smile when he put the green jacket on Johnson. Johnson said it meant a lot to him.