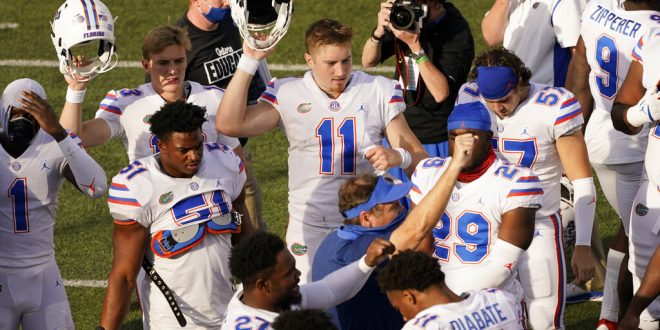 In addition, the head coach responded to questions regarding the the Gators’ defense and their ability to play at an elite level.

The Return of Kyle Pitts

After sustaining an injury in the Gators’ 44-28 win over the Georgia Bulldogs on Nov. 7, Pitts is ready to be back. Furthermore, if the tight end had it his way he would have been on the field against the Commodores according to Mullen.

In Pitts’ absence Florida tight ends, Kemore Gamble and Keon Zipperer, have stepped up the plate as playmakers for the Gators’ offense. In their win over Arkansas, Zipperer recorded 47 yards on three receptions, including two touchdowns. Additionally, Gamble found the end zone twice on Saturday against Vanderbilt.

Despite recording eight touchdowns and over four hundred yards on the season, Pitts won’t have a guaranteed start against the Wildcats.

Although Pitts will need to regain his way into the line-up, Mullen knows the abilities of one his greatest offensive weapons. On the other hand, what separates Pitts from other tight ends is his ability to create mismatches with opposing defenses.

As the, arguably, top wide receiver in the nation, Gators fans can most likely expect to see the return of the Kyle to Kyle connection this Saturday.

It is fair to say the Florida fan base has been critical of the Gators’ defensive play this season.

However, despite giving up some big defensive plays, Mullen states his team is doing what they need to win. After giving up 10 points in the first quarter, the Florida defense held the Commodores to seven points through three quarters.

When your “worst game” of the season includes three touchdown passes and 383 yards it’s no surprise you are in Heisman contention.

Trask knows how to put up big numbers and has proven this multiple times against SEC defenses. According to Mullen, Trask’s success can be credited to his ability to take advantage of what the defense gives him. Additionally, Trask is able to find the defensive mismatches and make big plays out of them.

The evolution from back-up high school quarterback to a dominant SEC starting quarterback is a unique story. For some, including Mullen, it’s hard to even find a comparison.

According to Mullen, the success of Trask and his offense comes from their maturity. Additionally, the team has ability to make in-game adjustments and execute them in real time.

The No. 6 Gators welcome the (3-5) Kentucky Wildcats to Ben Hill Griffin Stadium on Saturday, Nov. 28 at noon. Mullen noted Trask and the Gators can look forward to another SEC defensive challenge.