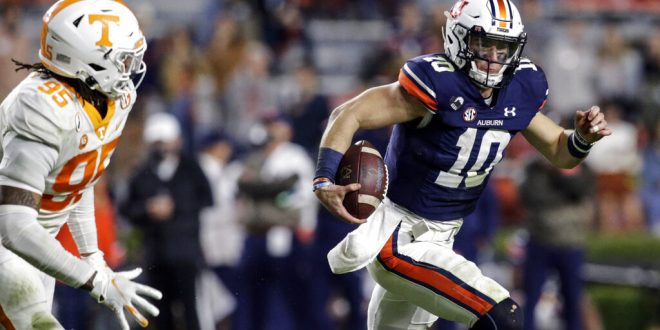 Auburn quarterback Bo Nix (10) scrambles away from Tennessee linebacker Kivon Bennett (95) during the second half of an NCAA college football game Saturday, Nov. 21, 2020, in Auburn, Ala. (AP Photo/Butch Dill)

Week 12 of SEC action has come and gone, but it did not leave without it’s fair share of action. The top-ranked Alabama Crimson Tide had no trouble with Kentucky, LSU squeaked past Arkansas and Georgia’s offense finally came alive. Here’s everything that happened on a wild a Saturday in the SEC.

Alabama and Auburn both win ahead of Iron Bowl

For both the Crimson Tide and Auburn Tigers, it would have been easy to overlook this week’s opponents and look ahead to this week’s showdown with their rival. Alabama cruised to victory over a three-win Kentucky team 63-3 and Auburn shutdown a struggling Tennessee unit.

Playing time for the Freshmen

With the game well in hand in the second half, Alabama head coach Nick Saban turned to the young guys to finish of the game and gain experience. Five-star true freshman Bryce Young entered the game for Jones in the third quarter and made the most of his opportunity. Young found Smith in the end zone from 19 yards out for his career touchdown. Freshman running back Jase McClellan also came in for half two and lead Alabama in rushing. Saban said it’s always great to get the young guys involved.

It was Alabama’s defense that stole the show, however, holding Kentucky to just 179 yards of total offense and getting six points on their own, via a 45-yard pick six by safety Jordan Battle.

Auburn’s defense, meanwhile, didn’t quite hinder Tennessee’s offense, surrendering 464 total yards, but they did make the plays when needed. With just over two minutes remaining in the third quarter, and Auburn clinging to a 13-10 lead, Tigers’ safety Smoke Monday intercepted Jarrett Guarantano’s pass in the end zone and smoked the defense en route to a 100-yard pick six. Auburn captured the momentum and didn’t look back from there, improving to 5-2 with the 30-17 win.

The wins set up a top-25 showdown in Tuscaloosa next week for the Iron Bowl. College Gameday will be in town as Auburn meets Alabama at 3:30 on Saturday.

Saturday’s Georgia-Mississippi State showdown was more than just a battle of the Bulldogs. The game saw a surprising aerial attack from both teams. Entering Saturday, the most passing yards Georgia had amassed in any game this season was 269 against Alabama. After making a change at quarterback, going to former five-star sophomore JT Daniels, Georgia threw for a stunning 401 yards. Daniels finished 28 for 38 for 401 and four touchdowns. A 40 yard go-ahead touchdown pass from Daniel to Kearis Jackson with just over nine minutes left put Georgia past Mississippi State 31-24.

Seemingly every yard gained in Athens on Saturday was through the air. The two teams combined 737 yards passing yet just 30 yards on the ground. The performance was very out of character for a Georgia team that only averages 238 passing yards a game, but nearly 150 yards on the ground per game.

In 2019, when LSU hosted Arkansas, the Tigers came into the game as 43 point favorites. This season, as they traveled to Fayetteville, LSU found themselves as one-point underdogs to the Razorbacks. Fast forward to the fourth quarter and LSU found themselves trailing 24-20 on the road. With just under four minutes left, freshman quarterback TJ Finley found receiver Jaray Jenkins in the end zone for a 13 yard score. LSU took their third lead of the game, but time remained for Feleipe Franks and his Razorback offense. However, Arkansas kicker A.J. Reed’s 44-yard game-tying attempt with 1:24 left was blocked by cornerback Jay Ward, and LSU held on, 27-24, to improve to (3-3) on the season. The loss dropped Arkansas to (3-5), their second defeat in as many weeks.

What’s Next in the SEC?

As mentioned, the headliner next week will be live from Tuscaloosa, Alabama, as the Tide take on the Tigers in one of College Football’s best rivalries: The Iron Bowl. The showdown will be live at 3:30 on CBS.

Elsewhere, LSU will travel to College Station to take on fifth ranked Texas A&M at 7 p.m. Saturday on ESPN. Georgia heads to Columbia for a battle with South Carolina. Catch that one at 7:30 on SEC Network.

Florida will return home on Saturday for a date with Kentucky. The Wildcats will look to win their second consecutive game in the Swamp. Kickoff is set for 12 p.m. Saturday on ESPN.

Will Levenson is a Journalism and Sports Media major at UF. He produces daily shows for WRUF, including "Sport Scene with Steve Russell," "Harp on Sports," and "The Tailgate." In addition, Will provides weekly sports updates for WUFT News and radio Sportscenters for WRUF radio. Will has been a writer at ESPN Gainesville since September 2019.
@BigWillLevenson
Previous Buccaneers, Rams square off in NFC Monday Night Football showdown
Next Mullen preparing for Kentucky and the return of Kyle Pitts