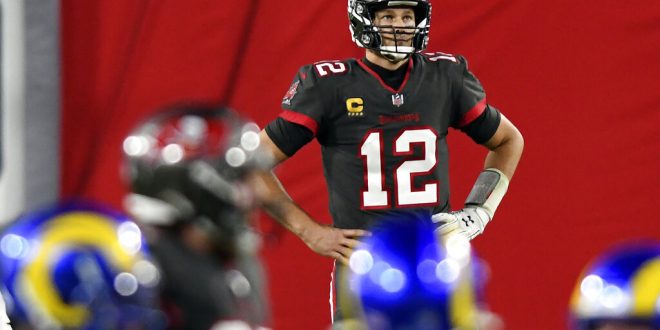 The Tampa Bay Buccaneers are now 7-4 in the season after losing 24-27 against the L.A Rams. The Bucs remain in the second place sport in the NFC South behind the New Orleans Saints.

This game was kept close with both teams responding to each other’s touchdowns. L.A scored a field goal with few minutes remaining to take the lead before heading to halftime.

A damaging fourth-quarter Tom Brady interception eliminated the Bucc’s chances of getting the win. This happened after the Rams’ kicker Matt Gay scored a field goal to break the tie and take the lead.

L.A’s offense did not always seem like they were being as productive as they could be. But even when they seemed like they could not finish their plays, they had some key plays that got them the victory.

Jared Goff and his offensive front started the game strong. marching 80 yards to open up scoring. They got a touchdown in the first quarter while holding the Buccs scoreless in the frame.

Goff recorded some good numbers too.  The fifth-year quarterback finished the game with 376 passing yards and three touchdowns.

Despite being able to keep a close game against the Rams, Brady did not always seem to be playing as strong as expected.

There were times where it looked like the veteran quarterback seemed to misread plays. His execution in other plays was also poor, resulting in penalties and easy giveaways.

Even he recognized that the offensive execution was not the best during this game.

Brady finished the night with 216 yards, 2 touchdowns and two interceptions.

It’s the battle of the Super Bowl MVPS when former MVP Brady faces current MVP Patrick Mahomes. This will be seen as the Buccaneers will hos the Kansas City Chiefs on Sunday. Kickoff is set at 4:25 pm.

As for the Rams, they will go back home to host the San Francisco 49ers for an NFC West rematch. Kickoff is set for Sunday at 4:05 pm.

Camila is a senior at the University of Florida, who served as a beat writer for the women's basketball team from 2019 until the 2021 season. She was also a beat writer for the Gators football team during the 2020 season. Camila is also WUFT's news director as well as a sports reporter/anchor.
@CamilaMaffuz
Previous Andrew Pickens Leads Oak Hall in First Year at Quarterback
Next Florida Women’s Basketball Ready for Season Opener Against Grambling State