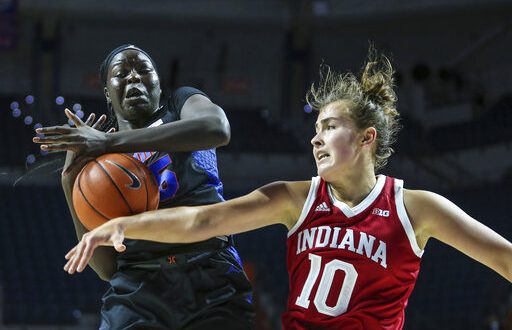 Florida forward Faith Dut (25) has her shot blocked by Indiana forward Aleksa Gulbe (10) during the first half of an NCAA women's basketball game on Friday, Nov. 22, 2019 in Gainesville, Fla. (AP Photo/Gary McCullough)

Florida women’s basketball head coach Cameron Newbauer and his team are one day away from their 2020-2021 season home opener against Grambling State University. The Gators welcome the Tigers to Exactech Arena for Florida’s first game since March.

After finishing the 2019-2020 season (15-15), coach Newbauer knows the Gators might be seen as underdogs. Last season, Florida went 6-10 against SEC opponents and felt the growing pains of a highly skilled freshman class.

However, this season the Gators welcome a plethora of new talent. Additionally, last season’s freshman class looks to become the mature leaders of this Florida team. Regardless of expectations, Newbauer and his team are focused on their inner circle.

Florida welcomes a hand full of new playmakers to their roster. Graduate transfers Sydnee Kinslow and Emily Sullivan bring talent and experience to this Florida team.

On the other hand, Florida has seen success in preparing their most recent freshman class for a future with Florida basketball. This season, Newbauer and the Gators hope to do the same with another group of young talent.

The graduate transfer out of the University of North Carolina is ready to be back on the court. After starting a promising campaign with the Tar Heels in her freshman and sophomore seasons, Sullivan found herself battling injuries.

The forward had to redshirt the past two seasons due to injury. However, Sullivan is ready to showcase her talent with the Gators.

Kinslow brings collegiate experience to this Gator team. During her time at Long Beach State, Kinslow led the Beach in rebounds in back-to-back seasons. In addition to her defensive efforts, the forward brings range on offense. In her final season with the Beach, Kinslow recorded 39 three-pointers and posted a .322 three-point field goal percentage.

The forward out of the Netherlands may not have collegiate experience, but she is no stranger to international competition. Toonders played for the Netherlands National team in the 2019 FIBA U18 Women’s European Championships. She averaged 7.6 points and 5.8 rebounds.

Merritt is the highest ranked recruit Florida basketball has seen since 2013. The forward comes in highly ranked for her offensive abilities and should be an asset for this Florida team.

Another addition for the Florida offense could come with the abilities of Farrell. The guard out of New Jersey comes regarded for her range and and scoring ability. As a freshman in high school, Farrell led the state of New Jersey with an average of 28.1 points.

For a Florida team with a larger number of newcomers than returners, the experience and leadership of Kiara Smith and Lavender Briggs.

As a true freshman Briggs rose as the Gators leading scorer and three-point shooter. The sophomore guard comes into this season with much needed SEC experience. Briggs guidance and offensive leadership put her in the position to repeat her success from last season.

In addition, Smith will bring drive to this Florida team. As a redshirt senior she has the talent and confidence to guide this inexperienced Gator squad through the season. She was the team’s leading assister last season and should create opportunities for he teammates to score.

Furthermore the skill from Danielle Rainey, Emanuely de Oliveira and Faith Dutt will be crucial for this Gator team. As the few returning Gator players, Newbauer will rely on their SEC experience throughout the season.