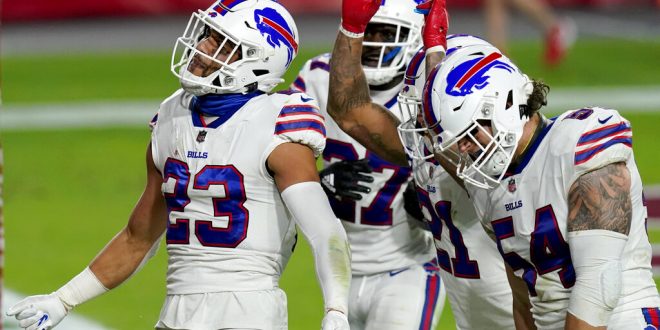 The Buffalo Bills ended a Monday Night Football losing streak with a win over the San Francisco 49ers. The Bills had not won a MNF matchup since 1999. Buffalo topped San Francisco 34-24.

This win keeps the Bills at the top of the AFC East.

San Francisco had control of the game in the first quarter, scoring a touchdown and stopping the Bills from scoring. But the Bills quickly took the lead during the second frame, outscoring the Niners 17 to nothing.

The Niners kept fighting as they matched the Bills’ scoring in the third and fourth quarter with 10 and seven points respectively. But San Francisco needed to do a lot more than matching the scoring in order to get a win.

Despite the loss, San Francisco quarterback Nick Mullens had a good performance. He threw for 316 yards, completing 26 of his 39 attempts. He also threw for three touchdowns but his two interceptions were the letdown of his performance.

The Niners were able to make the Bills struggle with the running game. But despite having good execution defensively, San Francisco could not stop Brian Daboll’s play-calling.

Buffalo’s offense was consistent throughout the whole night and was able to complete many plays despite San Francisco’s strong defensive efforts.

Quarterback Josh Allen was able to throw a near-perfect game, completing 32 of his 40 attempts. This ended in 375 yards and four touchdowns.

This game also featured wide receiver Cole Beasley setting career-high stats. Beasley had nine receptions that accounted for 130 yards, 113 being in the first half.

Wideout Stefon Diggs also put up good numbers as he got 10 receptions for 92 yards.

Allen recognized that the offense was “clicking” the whole night.

The Buffalo Bills will go back home as they prepare to host the no-longer-undefeated Pittsburgh Steelers. The match will be on Sunday and kickoff is set for 8:20 pm.

The San Francisco Niners will stay home as they welcome their next opponent, the Washington Football Team. Washington will be coming into this match fresh off a big win against the Steelers. Kickoff for this match is set for 4:25 pm on Sunday.

Camila is a senior at the University of Florida, who served as a beat writer for the women's basketball team from 2019 until the 2021 season. She was also a beat writer for the Gators football team during the 2020 season. Camila is also WUFT's news director as well as a sports reporter/anchor.
@CamilaMaffuz
Previous Four Gator Football players semifinalists for National Awards
Next Smith and Briggs lead Gators Women’s Basketball Over Florida Atlantic