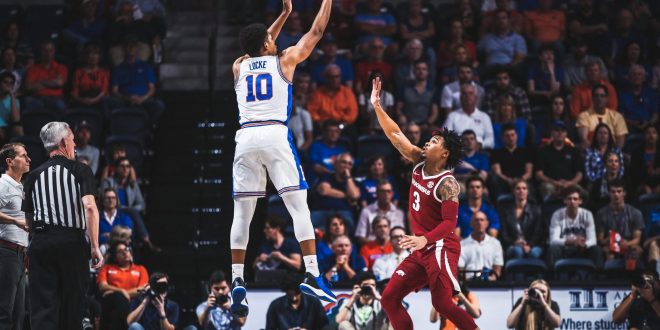 Noah Locke (10) makes a three-pointer against Arkansas on Feb. 18, 2020. He finished with 3 made three-pointers. (Credit @GatorsMBK on Twitter)

Junior guard for the Florida Gators men’s basketball team, Noah Locke, had a lot to say about the 2020-2021 season and his own progress from last year.

During his freshman season, Locke began feeling a hip pain that doctor’s had a hard time understanding the source of. This, however, did not stop him from playing. He also went through extensive hip mobility exercises prior to game time to relieve the pain, but he knew he was not playing his best still.

Locke made a conscious effort to avoid discussing the injury, so many people outside of the Gators basketball program were unaware of the player’s discomfort. Late in the 2019-2020 season though, it became more apparent that his hip was affecting his playing ability. While overall his numbers went up from the previous season, his three-point percentage went from 75.0 in mid-February, to 37.5 in early March. The injury mainly had effects on his lateral movement and jumping ability.

Locke had to sit out during several practices in order to ensure his ability to play in games.

He says that when he realized that he was constantly thinking about it, he knew that he needed to do something about injury.

Locke used the shut down of athletics this summer due to COVID-19 as a time to recover. He underwent surgery on his hip in May.

This did stop him from attending training and supporting his team, in the offseason though. Locke made a point of continuing to be a leader for the Gators, despite not being able to play with them.

For the 2020-21 season, the Gators have nine returning players and six new members to the team.

He said that the freshman’s offensive game has been making improvements as well.

Locke also says that freshman, Samson Ruzhentsev, has potential to be a strong asset to the Gators.

At the two-week mark before the Gators officially return to the court, Locke participated in his first practice, but he was still limited in participation.

He said that he it went well, but he is looking forward to getting back to where he was before the injury.

The guard said that he is feeling 100% coming into this season.

Though, Locke says that there are times that he still thinks about the injury, but he has noticed the differences in his play.

Gators men’s basketball faces off against their first opponent of the season on Nov. 27. In the AP preseason poll, Virginia is projected at number four, while Florida was unranked. Last season, the Gators went 19-12 overall, while Virginia went 23-7.

Rylee is a second year Journalism major with a specialization in Sports and Media at the University of Florida College of Journalism and Communications.
Previous Kim Ng Fearlessly Making History
Next Wichita State basketball coach Gregg Marshall resigns