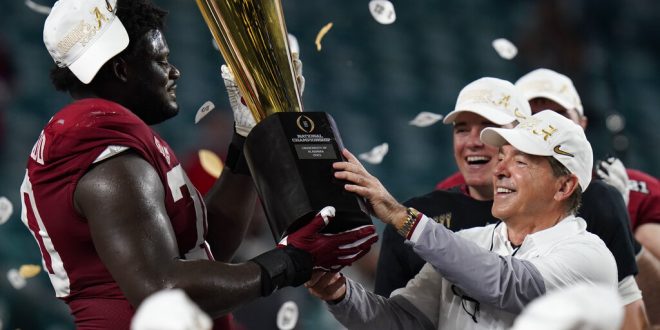 The No. 1 Alabama Crimson Tide showed off last night in their 52-24 route over Ohio State.

It was a night full of breaking records, huge plays and really some things that only Alabama could manage.

Alabama head coach, Nick Saban, made history with last night’s win over the Buckeyes. The win pushed Saban ahead of  Paul “Bear” Bryant for the most national championships by a head coach in college football history.

Saban has won seven national titles during his time as a head coach, six of those coming during his tenure at Alabama. He has also now won a national title with Alabama in three different decades.  Since 2009, Alabama and Saban have won half the BCS and CFP national championships played.

With the ever-growing list of accomplishments, it’s hard to argue with Mac Jones’ assessment of Saban.

And even though Saban will turn 70 in 2021, he shows no signs of slowing down.

Despite missing most of the second half with a dislocated finger, Heisman Winner, DeVonta Smith, was still able to break records. In the first half, Smith racked up 12 receptions for 215 yards and three touchdowns. With those 12 catches, he also broke a CFP title game record for most receptions.

Before exiting the game though, Smith set an SEC record for career receiving yards. He was also named the games’ Offensive MVP.

Smith is expected to be one of the top picks in the 2021 NFL Draft. He has been rumored to go at pick number three to the Miami Dolphins, but with his huge recent performances, other teams may be chomping at the bit to pick him up. And his head coach knows he will go on to do great things in the NFL.

The theme of the night seemed to be get injured and still play one of the best offensive games ever. Towards the end of the game, quarterback Mac Jones was limping on and off the field for drives and still managed 464 yards passing with five touchdowns.

On the season, Jones threw for more than 4,000 yards and won the Davey O’Brien Award for the nation’s top QB. This season was unique and Jones and the Tide found themselves playing against all SEC opponents. Jones can’t help but think that this team will go down in history.