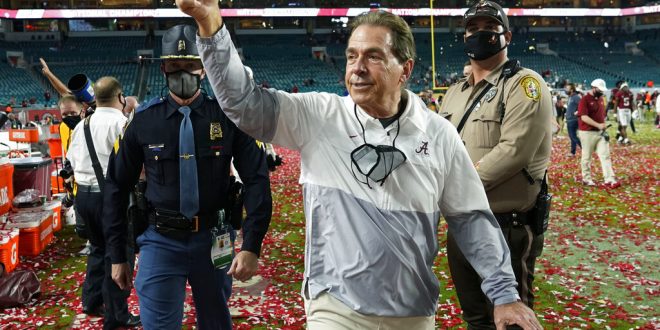 College football in the summer of 2020 was far from uncertain as COVID-19 had spread across the United States, causing a nationwide lockdown. The way we viewed life and sports changed in the blink of an eye. Who would have thought seven months later that we would be hoisting another college football national champion?

Nick Saban passed Paul “Bear” Bryant for the most national champions as he won his seventh title last night.

The Buckeyes put out a decent offensive attack but in the end, they just couldn’t keep up with Alabama’s impressive offensive weapons. In the first quarter, Ohio’s running back Trey Sermon left the game with an injury on the first drive.

Quarterback Justin Fields threw for 194 yards and one touchdown completing 17 out of 33 passing attempts. He also ran for 67 yards on six carries. Fields wasn’t 100 percent coming into the matchup as he, unfortunately, took a hit that injured him quite a bit in his last game against the Clemson Tigers.

Fields didn’t get the outcome he wanted but he is expected to be a first-round pick in the 2021 NFL Draft this year.

The Buckeyes running back Master Teague III rushed for 65 yards on 16 carries and scored two touchdowns. Teague III’s effort kept Ohio State in the game during the first half.

In the end, Ohio State just couldn’t keep up with Alabama well balanced offensive gameplay but they will come back next season with the hopes of returning to the national championship again.

Justin Fields spoke on not getting the outcome the team wanted:

Offensive coordinator Steve Sarkisian had Ohio State defense on their heels most of the night as they tried to stop the Bama offensive attack.

Crimson Tide quarterback Mac Jones threw for 464 yards and five touchdowns completing 36 out of 45 passing attempts. He was able to get the ball to target the majority of his receivers throughout the game from various play calls.

Jones threw as many touchdowns as Joe Burrow did in last year’s National Championship as both quarterbacks put up similar numbers.

Heisman trophy winner DeVonta Smith had a monstrous game as he caught 12 receptions for 215 yards and three touchdowns in the first half. However, Smith left the game early in the third quarter with a right-hand injury.

The Crimson Tide receiver set multiple records last night. In the first half as he caught 12 passes making it a new CFP title game record. Smith’s 215 receiving yards are the second-most in a CFP game and his three touchdowns tied the BCS/CFP title game record that was set by USC receiver Steve Smith in 2005.

Smith is also projected to be a first-round pick in the upcoming 2021 NFL Draft this year in April.

—DeVonta Smith describes what it feels like to cap off this season with a national title pic.twitter.com/gJdTpLyqlI

Alabama running back Najee Harris ran for 79 yards on 22 carries for two touchdowns. Harris also had seven receptions for 79 yards and one receiving touchdown.

Mac Jones finds Najee Harris for a 26-yard catch and run to put the Tide back on top.#NationalChampionship pic.twitter.com/XbbVtHXmIq

The Bama offense had a well-balanced attack having a total offense of 621 yards total last night leading them to victory. They remained undefeated this season as they played an all-SEC schedule finishing the season 12-0.