Home / Basketball / Florida NBA Round Up 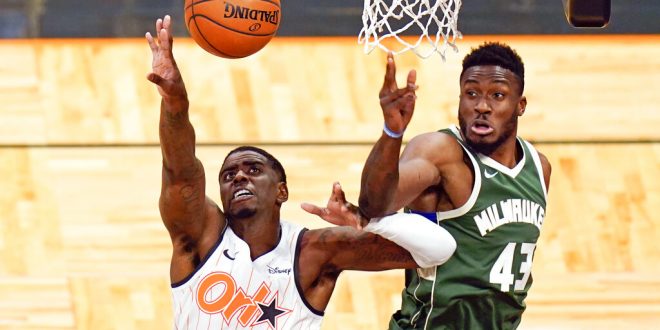 Florida NBA Round Up

These two teams have a history, being Eastern Conference rivals last season.  Both teams entered the matchup 6-4. Magic Center Nikola Vucevic put up a fight immediately, scoring ten points in the first twelve minutes of the game.

With Orlando leading most of the first quarter, the Bucks took over 25-23 as they entered the second. The Bucks utilized the bench and established a 63-54 point lead heading into half time. Magic forward Aaron Gordon dunked over two time NBA MVP Giannis Antetokounmpo, bring the score up to 88-86 in the second half.

Antetokounmpo scored a three-pointer in response and assisted Bobby Portis in a three as well. This fueled them the rest of the game, which ended in a 22 point lead for the Bucks. Nikola Vucevic finished with 28 points and 13 rebounds, while  Aaron Gordon scored 21 points with 5 rebounds. Milwaukee also won the four meetups with Orlando last season.

Orlando’s next game is Wednesday against the Celtics.

The Miami Heat and the Philadelphia 76ers are scheduled to face off Tuesday night with tipoff at 7 pm.

Unfortunately, the game was up in the air with the Heat adding seven players to the health and safety list after contact tracing. The players include stars Jimmy Butler, Bam Adebayo, and Goran Dragic, as well as Kendrick Nunn, Maurice Harkless, Udonis Haslem, and KZ OKpala.

On top of that, Miami Guard Avery Bradley was previously placed on the health and safety list before Sunday’s game against Boston was postponed. On Twitter, the Heat announced Tuesday afternoon that the game against Philadelphia would continue as scheduled.

ESPN’s Brian Windhorst explains the change of procedures that need to take place to not only limit contact tracing but also limit game postponement.

He continues by explaining behavior has to change off the court as well.

Miami is currently 4-4 in their season. They are also set to play the 76ers Thursday night at 7:30 pm as well.