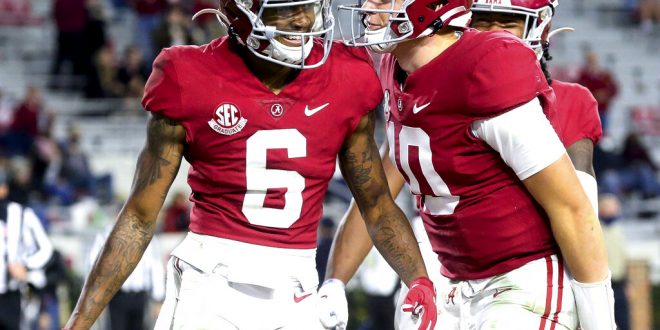 Alabama wide receiver DeVonta Smith (6) and quarterback Mac Jones (10) celebrate a touchdown pass during the second half of an NCAA college football game against Mississippi State on Saturday, Oct. 31, 2020, in Tuscaloosa, Ala. (Gary Cosby Jr./The Tuscaloosa News via AP)

The day has finally arrived. After many months of blood, sweat, and tears the 2020 college football season comes down to this. Top-ranked Alabama takes on third-ranked Ohio State from sunny South Florida. With kickoff just hours away, we’ll get you set for what could be the game of the season.

There is no shortage of intriguing storylines to watch in this one.

For starters, just one glance at each team’s record shows the abnormality of this 2020 season. Alabama enters at 12-0, having beaten 11 SEC teams and Notre Dame. Ohio State, meanwhile. will suit up for just the eighth time this season, as they sit at 7-0. For months, it seemed the Big Ten wouldn’t even have a season. Then, once a five-game season was scrambled together, it appeared this wouldn’t be enough.

However, everything fell right for the Buckeyes. Despite some early struggles against a quality Indiana team, and difficulties had with Northwestern’s stout defense in the Conference Championship, Ohio State made it out unscathed.

Last weekend Ohio State passed its first true major test, soundly defeating the second-ranked Clemson Tigers. With the astounding victory, the Buckeyes proved that, regardless of a shortened schedule, they belong on college football’s biggest stage.

On the other hand, the Crimson Tide have undoubtedly been the nation’s best throughout this season. They cruised through the 10-game SEC schedule, winning every game by at least 15 points. Alabama’s only single-digit win was in the SEC Championship game against a Florida Gators team that kept the final score within a touchdown.

Can Alabama earn their first undefeated season in the College Football Playoff era and first since 2009? They’ll need their offensive stars to shine bright to do it.

This past Tuesday, the nation’s leading receiver, Alabama’s DeVonta Smith was awarded college football’s most prestigious award, the Heisman trophy. Smith’s 1,641 receiving yards were nearly 500 more than any other player in the country. Add in a nation-leading 20 touchdowns and Smith becomes the centerpiece of Alabama’s explosive offense.

Smith wasn’t the only Alabama star to get attention from the Heisman Trophy. Bama’s quarterback Mac Jones finished third in Heisman voting, and running back Najee Harris finished third. Jones trails just Florida’s Kyle Trask in both yards and touchdowns this season. Harris’ 1,733 scrimmage yards and 27 total touchdowns rank third and first respectively. With an explosive running back, a near ungradable wideout, and an accurate passer dishing it around, Alabama’s offense becomes almost impossible to stop.

Things won’t get any easier for the Buckeyes’ defense as Bama might be adding yet another dynamic weapon tonight. Alabama Head Coach Nick Saban said speedy wideout Jaylen Waddle will be a game-time decision. Waddle injured his ankle in late October, and at the time it appeared the setback might season-ending. But with Waddle’s recent return to practice, there’s a very real chance he suits up tonight.

Jaylen Waddle will be a game-time decision. pic.twitter.com/PpzP8s04JT

Waddle’s explosiveness can not be understated. He had 557 yards only 25 receptions to go along with four scores before going down. His ability to get open downfield and take the top off a defense is simply uncanny. It is safe to the Buckeye’s defense will have their hands full.

While Ohio State’s offense didn’t put up the same staggering numbers — primarily because they played just seven games — the unit proved just how dangerous it can be with last week’s win. Ohio State’s success starts and ends with quarterback Justin Fields. The former five-star transfer from Georgia had struggled in the games leading up to the playoff. Fields threw three interceptions against Indiana in late November and two more against Northwestern in the Big Ten Championship game.

Despite these mistakes, however, Ohio State escaped and prevailed. In the conference championship, it was Ohio State’s running game that saved the day. Star halfback Trey Sermon ran all over a stout Wildcats defense, garnering 331 yards and two touchdowns on 29 carries.

Last week, against Clemson, both Fields and Sermon shined in a big offensive explosion in the Sugar Bowl. Fields’s avenged his previous two poor performances with the best game of his career. Fields threw for 385 yards and an astounding six touchdowns in a 49-28 victory. Sermon also impressed garnering over 250 yards of scrimmage and getting in the end zone once. When both are at their best, the Buckeye’s offense can be just as good as Bama’s.

Ohio State’s offense has the firepower to be just as explosive as Alabama’s. With the big-armed Fields slinging it around to speedy wideouts Chris Olave and Garrett Wilson, a big-play touchdown is always a threat. But the ground and pound might be the Buckeyes’ best weapon. Putting Fields legs to use in the read-option offense can open lanes in the run game and keep Bama’s offensive stars off the field.

Alabama will score points. Ohio State will score points. I’m not saying to take the over — the 75 points total it is right now is quite high — but I am saying to expect quite a few touchdown celebrations. Neither defense has been anything special this season, while the opposite can be said about the offensive attacks. Whichever offense gets more opportunities to score will have the advantage. Alabama’s defense has gotten gashed quite a bit this season but they have been very opportunistic this season. Bama’s 22 turnovers are tied for sixth-best in the country. Turning over an Ohio State offense that has struggled taking care of the football this season should put Bama in the driver’s seat for National Championship victory.

Kickoff is set for 8 p.m. from Hard Rock Stadium. The game will be broadcast on ABC, ESPN and ESPN 2. You can also listen live right here, with coverage beginning at 7 p.m.

Will Levenson is a Journalism and Sports Media major at UF. He produces daily shows for WRUF, including "Sport Scene with Steve Russell," "Harp on Sports," and "The Tailgate." In addition, Will provides weekly sports updates for WUFT News and radio Sportscenters for WRUF radio. Will has been a writer at ESPN Gainesville since September 2019.
@BigWillLevenson
Previous Pat Dooley’s Back Nine January 11
Next Urban Meyer among Jaguars Coaching Candidates