Santa Fe Men’s Basketball team begins its 2021 season this Friday. The Saints had a promising ending to their 2019-20 season, as they went 15-16, averaging 72.2 points per game and reaching the conference finals. However, there are eight new faces that will be on the roster, with only five freshman returning. Head coach Chris Mowry is optimistic for the new season as he will be working with an almost entirely new team. Here are some things to note about the team with basketball season now upon us.

Two promising candidates that will be new to the roaster is Bradley Douglas and Hasan Abdul-Hakim. Douglas, from Eustis, Florida, stands at 6’1 and will be playing guard while Abdul-Hakim, from Toronto, Ontario, stands at 6-foot-7 and will be playing forward. Yaw Obeng-Mensah, Japhet Medor and DJ Henderson are some of the few players that will be returning to the team.

With a condensed scheduled, players will be prone to fatigue, but Chris Mowry notes that the this year’s roster has a lot of depth, allowing for an efficient rotation.

This year’s schedule will contain 22 regular games, and 18 of those will be played against conference teams. Some notable teams that will be a challenge for the Saints is Daytona State Falcons and Polk State Eagles. For the previous season, the Eagles went 7-5 for conference games and 21-10 overall, while the Falcons went 6-6 and 17-13 overall.

Chris Mowry is excited to start the season as the team has only been able to practice in the off-season. Some practices had minimum participation as most players had contracted the virus and were isolated.

Great to be on the home floor scrimmaging today, getting ready for when the ball officially goes up next Friday night at 7:00 vs. Florida Gateway! pic.twitter.com/BI2z5d8DjO

The Saint’s home opener is this Friday at 7 p.m. against the Florida Gateway College. Santa Fe will not be allowing fans to their home games for the month of January, but that may change as the season progresses. On the road, teams from the school will be deciding as there is no conference or statewide mandated policy. 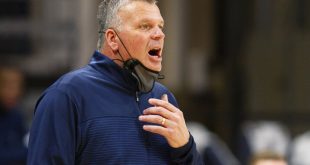