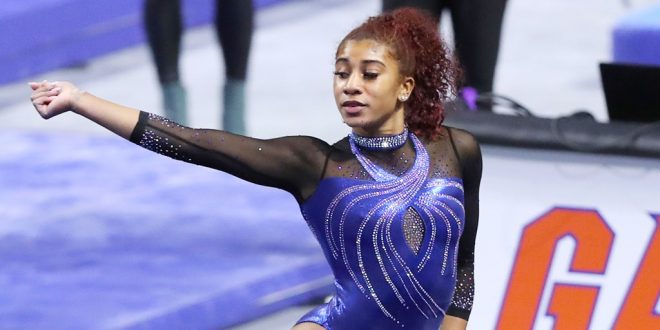 The No. 1 Florida Gators Gymnastics Team opened their season with a victory over the No. 18 Auburn Tigers and followed it up with another win, this time against the No. 11 Georgia Bulldogs at the O’Connell Center. Now, with two wins under their belt, the Gators will look to build some consistency as they hit the road for their second away meet of the season. Awaiting them at their destination of Fayetteville, Arkansas is Head Coach Jordyn Wieber and her No. 8 Razorbacks.

Wieber, a former Olympic gymnast herself, took over as head coach for Arkansas after the 2019 season. In her second year on the job, the Razorbacks are currently 0-2 on the season. However, with both losses coming at the hands of No. 5 LSU, this record does not fully indicate the talents of the team. Razorback senior Maggie O’Hara earned the honor of Co-Specialist of the Week, sharing the award with Gator junior Nya Reed, after her second performance against LSU. This performance by O’Hara featured a 9.95 on bars and a 9.925 on the beam.

“In the gym, we put in the numbers, and it’s just a matter of going out there and showing what we can do. I’m really excited for next weekend.”- Junior Leah Clapper after the meet against Georgia

Furthermore, in their week two performances, Arkansas actually outscored Florida on their floor routines. While the Gators posted a 49.400 on their floor routines against Georgia, Arkansas scored 49.500 on the floor in their defeat to LSU. While Florida did outscore the Razorbacks in each of the other three events, those scores show that the Gators are not unbeatable. Head Coach Jenny Rowland and her team will need to maintain their high standards of expectation if they want to ensure a still-perfect record after their trip to the “Wonder State.”

History Between the Teams

On February 25th, 2011, the Arkansas Razorbacks celebrated a home victory over the Gators in Barnhill Arena. However, this would be the last time they were able to do so for the foreseeable future. The Gators are currently on a 20-meet win streak over the Razorbacks, with their last loss coming later in the 2011 season as well. In fact, the meet on Friday will be one month and eight days shy of marking the ten-year anniversary of the last time Arkansas bested Florida in gymnastics.

Last year, the Gators opened their season up at the O’Connell Center against Arkansas. The meet ended with, unsurprisingly, a gators victory by a score of 197.35-194.40. This total was the highest of any team to open the 2020 season and broke the record for most points by a Gators team in an opening meet. This record was broken once again by the 2021 team.

The meet on Friday will begin at 8 p.m. and can be viewed on SEC Network+.

Carson Cashion is a second-year student at the University of Florida, and has a major in journalism with a specialization in sports and media. Originally from the Orlando area, Cashion has covered the UF Gymnastics team as well as Oak Hall athletics for ESPN Gainesville.
Previous Head Coach Johnny Wiggs Talks Santa Fe Baseball
Next Lightning Pick Up Third Win in a Row