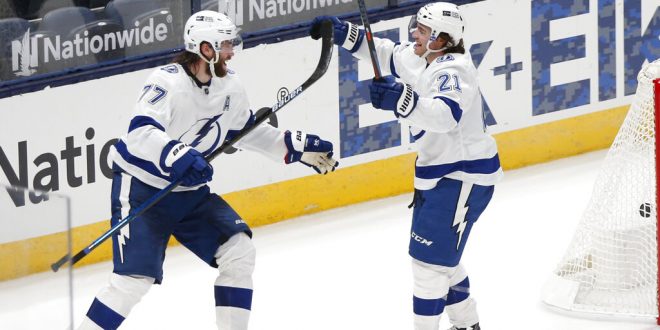 The Tampa Bay Lightning notched their third win in a row Thursday night after defeating the Columbus Blue Jackets, 3-2, in overtime.

Battling From Behind Early

It was a little bit of a slow start for the Lightning (3-0-0) to begin action on Thursday. The Blue Jackets (1-2-2), however, wasted no time putting the game’s first points on the board.

Right-winger Oliver Bjorkstrand found the back of the net roughly 20 seconds in to put Columbus ahead early on.

After a scoreless first period, Tampa Bay was finally able to find its offense in the second when center Blake Coleman tied the game at 1-1 with about four minutes to play in the period. A little over a minute later, the Lightning were able to strike again after right-winger Mathieu Joseph found the back of the net to put Tampa Bay in front, 2-1.

By the second intermission, the Lightning held a one-goal advantage. Additionally, Tampa Bay found itself coming away with a few more shots on goal than the Blue Jackets.

Lightning Squeak it Out

Columbus, like in the first period, was once again able to score quickly to open the third. Roughly 50 seconds in, left-winger Nick Foligno was able to take advantage of a power play and tie the game at 2-2.

Both teams would battle for the remainder of the final period. Ultimately, though, the game went into overtime.

With a little over three minutes remaining, Lightning center Brayden Point was able to score the game-winning goal off of assists from teammates Steven Stamkos and Victor Hedman to win it for Tampa Bay.

The two teams are set to meet again on Saturday. Action will get underway at 2 p.m.

Previous No. 1 Gators Travel to Take On No. 8 Razorbacks
Next Bucs and Packers Square Off for the NFC Championship