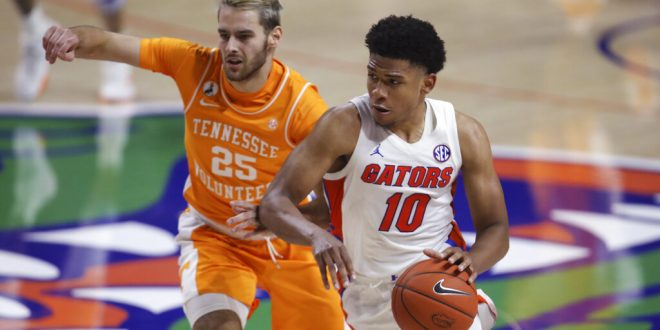 The Gator Men’s Basketball team defeated the West Virginia Mountaineers 85-80 in the SEC-Big 12 Challenge matchup on Saturday. This marks their fourth-consecutive win, as well as their second straight AP Top 25 victory.

The Gators turned the whole game around in the second half. Mountaineer forward Derek Culver scored 21 points in the first half of the game and even reached a career-high of 28. However, he was no match for Florida forward Colin Castleton.  Castleton scored 15 of his overall 21 points after halftime and was a powerhouse defensively against West Virginia.

I thought Colin was really good defensively in the second half. Much better. All of us were. Everyone that played, I thought, was a little bit more locked in defensively,” Head Coach Mike White said.

Guard Scottie Lewis broke the tie with 4:05 left on the clock. Castleton took over with a three-pointer and two free throws, which put the Gators back on top with just a minute 36 on the clock. Appleby wrapped up the SEC matchup with 2 free-throws, ending in a Florida victory.

The Florida Gators scored 83 percent on the free-throw line during this matchup.

Gator Head Coach Mike White explains how the team pulled through in the second half against Culver.

The team’s next game is on Feb. 3 against South Carolina.