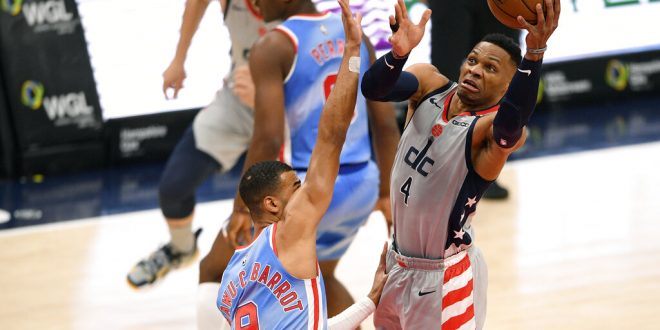 Two players, Bradley Beal and Russell Westbrook made a name for themselves after hitting a pair of clutch three-pointers in the final seconds of the game.

Former Gator, Bradley Beal confesses that his team still has a lot of work to put in, but that it felt good to get a win. Beal was on his game last night being one of the scoring leaders with 37 points. He now has 10 games this season with 30-plus points, tied for the most in the NBA.

Coach Brooks was pleased with Westbrook’s performance. Russell Westbrook shined last night scoring a season-high of 41 points, 10 rebounds and eight assists.  Being a leader and an important asset to the team, Westbrook showed out his best performance when the Wizards needed it most. Westbrooks describes what it means to be a leader.

Kyrie Irving took responsibility for his actions after admitting that “he couldn’t guard a stick,” after allowing 149 points. This all started in quarter one. Washington’s run carried into the second quarter as players Moe Wagner and Ish Smith scored eight more points. The Washington Wizards tweeted a snippet of the game just to show how thrilling it truly was.

In the fourth quarter, Beal had 22 points and Westbrook had 15. Durant, second in the NBA in scoring behind Beal, also had 37 points this game. “It’s not looking great defensively for our team, giving up that many points,” Durant said after Washington shot over 50 percent for the game.

Let’s see if the Washington Wizard’s season continues to look up as they take on the Portland Trailblazers tomorrow at 8 p.m.