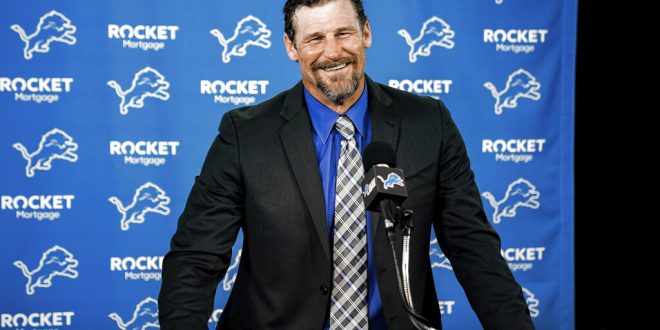 In this image provided by the Detroit Lions, Detroit Lions head coach Dan Campbell speaks during a news conference via video on his first day at the NFL football team's practice facility, Thursday, Jan. 21, 2021 in Allen Park, Mich. (Detroit Lions via AP).

The Detroit Lions are in a rebuilding mode for the next NFL season after announcing several changes to its team and staff.

The biggest shift for the Lions is the quarterback trade of Matthew Stafford for Jared Goff, announced Saturday. In addition to Goff, the Lions will receive a third-round pick in 2021 and first-round picks in 2022 and 2023 from the L.A. Rams.

Just talked to Jared Goff — he has already spoken to Lions coach Dan Campbell and several other members of the Lions’ staff. Based on those conversations, they very clearly view him as their starter moving forward. Physical coming soon. Sounds like they’re fired up to have him.

Earlier this year, the Lions also hired Brad Holmes as their new general manager. Then, the organization hired Dan Campbell as its new head coach after firing Matt Patricia in November 2020. The team will have to adjust its dynamic under Campbell in hopes of having a better record for the 2021 season.

#Lions HC Dan Campbell is putting together a strong staff.

Front office is also being reshaped with high talent evaluators. This will take time, but Detroit appears to finally being doing it the right way.

Detroit’s last divisional playoff win was in 1991 against the Cowboys. Since then, the Lions’ last playoff appearance was in 2016. Over the past three seasons, they have placed fourth in the NFC North. The franchise has also never made a Super Bowl appearance. Tori Petry, a multimedia journalist for the Lions, explained how in interviews Campbell and Holmes have acknowledged that the team’s defense is in need of improvement in order to get this franchise where they want it to be.

Under Campbell, the most significant improvement expected will be to the defensive scheme. Petry explained how to Campbell, the defense appeared lost and was trying to do too much when he watched them on tape.

For the future, the goal is to get Lion’s defense back on track. Campbell’s goal is to make sure his defense knows where they need to be at all times, according to Petry. If that happens, the defense will cohesively improve.

Although there are a lot of new revolving pieces entering this franchise, there is hope for a comeback. The Lions can also make a huge improvement to their team with two back-to-back first-round picks secured. Seeing how this team develops a new rhythm during its off-season will be a determining factor for what the Lion’s future holds.

Kaitlyn Wadulack is a third-year journalism student specializing in sports and media at the University of Florida. You can reach Kaitlyn at k.wadulack@ufl.edu
Previous Florida Hoops Crack Top 25
Next Rams and Lions Swap Quarterbacks in Blockbuster Trade