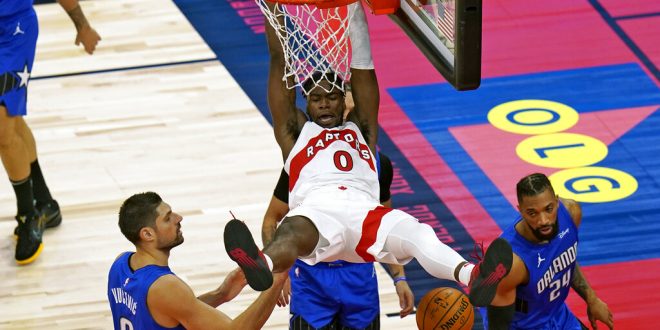 Concerns and struggles certainly seem to be mounting in Orlando. On Sunday, the Orlando Magic lost to the Toronto Raptors 102-115, a third-straight loss for Steve Clifford’s squad.

The Orlando Magic’s trip to Tampa was an attempt to cancel a two-game losing skid against a team that has had their own concerns. The Raptors themselves lost their previous three games. However, as the game entered the latter stages of the contest, the Raptors poured it on.

The game was lopsided from the jump. The Raptors held a 27-15 lead over the Magic at the end of the first quarter that featured a quick 10-point run in two minutes. With the 12-point lead established, the Magic were never able to break through and catch up with the Raptors. A 14-point lead at half, 11-point lead after three, and a final victory margin of 12. The ten-point run in the first quarter put a margin between the Raptors and Magic that Toronto defended for the remainder of the game.

As the saying goes, basketball is a game of runs, and the Magic were able to get the score into a five-point game, but the Raptors would answer to stretch the lead again.

Remember when the Magic started the season 6-2? That is starting to seem like a distant memory at the Amway Center.

In this shortened-NBA season, wins are crucial. The Magic are falling by the wayside of teams that are picking up key wins. For example, the Cleveland Cavaliers won four out of six games against the Nets (twice), Pistons and Knicks, with their two losses being against the far superior Lakers and Celtics.

The Magic have to turn something around to be in contention for a playoff spot. And, frankly, they have to turn around quickly as a third of the season is gone.

Also, Aaron Gordon picked up an injury on Sunday that forced the power forward to leave the game early. If he were to miss an extended period of time, it would be the second big loss for the Magic after the untimely departure of Markelle Fultz for the season with a torn ACL.

This was the offensive possession prior to Aaron Gordon picking up a flagrant foul, and subsequently having to head to the locker room. pic.twitter.com/2aKtBfzhCc

Aaron Gordon is the Magic’s fourth-highest scorer, averaging 13.8 PPG. Also, Gordon leads the Magic in assists per game (4.2) and blocks per game (0.8).

Improving and Moving On

It is not all doom and gloom in Orlando. Nikola Vucevic is in the running for his second all-star appearance with nearly 23 points per game, and Cole Anthony is developing into a dynamic playmaker. The rookie out of North Carolina displayed his talents against the Raptors.

The Orlando Magic have a chance to snap their three-game skid on Tuesday when they play another game against the Toronto Raptors. However, as things stand, the concerns seem to be overwhelming the optimism of a young team.

Originally from Seminole in the Tampa Bay area, Kyle is a contributor for ESPN Gainesville as well as local NPR and PBS affiliate WUFT. Kyle wants to get into sports with a lofty dream of being a sports broadcaster. He was raised playing soccer and baseball while watching hockey and football, so the knowledge about various sports is fairly extensive.
@KyleFanslerUF
Previous Pat Dooley’s Back Nine: February 1
Next Wizards Beat Nets in Wild Game