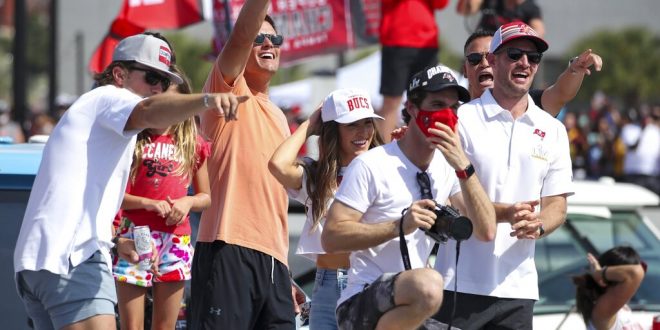 Perhaps the riskiest throw of Tom Brady’s career wasn’t on a football field.

ONE MORE PASS: Tom Brady successfully throws the Lombardi trophy from one boat to another during the Bucs’ Super Bowl championship parade in Tampa. https://t.co/0EHqJvmD6V pic.twitter.com/G4DxTIa07F

Coming off a 31-9 victory against the Chiefs in Super Bowl LV, the Buccaneers took to the Hillsborough River. In lieu of a traditional parade, the Bucs underwent a boat parade on Wednesday. Here, Brady tossed the Lombardi Trophy across the river to tight end Cameron Brate.

Yet another perfect throw from the seven-time Super Bowl champion was just one highlight from the celebration. From Brady to coach Bruce Arians, the entire franchise is enjoying its second world championship.

Speaking of White, one of the day’s top highlights came from Raymond James Stadium. Owning various horses, White took one to the site of Super Bowl LV Wednesday. Here, he took a victory lap by horseback with the Lombardi Trophy.

The NFL’s life of the party was in full force Wednesday. Pro Bowl tight end Rob Gronkowski looked straight out of a movie. “Gronk” proceeded to show off his dance moves to Tampa, relishing every last second of his fourth Super Bowl victory.

A notable moment from Super Bowl LV was a crucial pass breakup on Tyreek Hill from rookie safety Antoine Winfield Jr. Notoriously, Winfield mocked Hill’s famous peace sign celebration by holding up his two fingers. The rookie safety continued Wednesday, by proudly holding up a peace sign along with a WWE championship belt.

For now, the Bucs will continue celebrating their second Super Bowl victory. But with the league new year beginning on March 17, it will be a quick turn around for general manager Jason Licht.

David, Shaq Barrett and Godwin highlight the impending free agents for Tampa Bay. Licht will have to make a decision on various players, including Leonard Fournette and Antonio Brown. The early indication is the Bucs want to bring back the same team, but time will ultimately tell the 2021 roster.

Until then, the Tampa Bay Buccaneers remain the 2021 NFL Champions.

Sam Petosa is a Journalism major pursuing a Specialization in Sports and Media at UF. The South Florida native produces daily shows for WRUF, including "Sport Scene with Steve Russell, and "The Tailgate." In addition, Sam provides weekly sports updates for WUFT News and radio Sportscenter's for WRUF radio. Sam has been a writer at ESPN Gainesville since January 2020.
@sampetosa5
Previous College Hoops Top 25: Iowa bounces back, Villanova and Virginia stay hot
Next Florida Gators Track and Field Gets Set For Arkansas Tyson Invitational