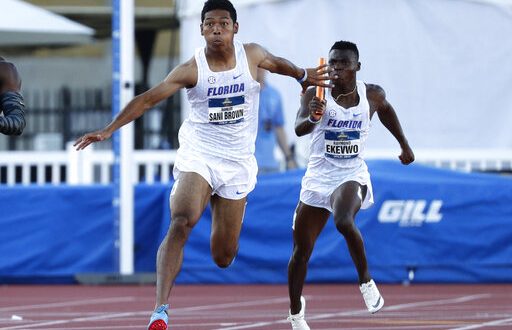 The Florida Gators track and field team is set to be back in action as they participate in the Arkansas Tyson Invitational starting Friday, Feb. 12 at 12 p.m. The event will run through Feb. 13 as the Gators participate in their third meet of the season.

This will be the first appearance of the year for Raymond Ekevwo, who will run in the 60 meters. Ekevwo set a personal best of 6.53 earlier in his career and will look to improve in that event as he currently has the third-fastest time in school history.

Thomas Mardal, the SEC Field Athlete of the Week after setting an NCAA-leading mark in the weight throw, will make his second appearance of the year while Chantz Sawyers will race in the 400 meters.

P.J. Austin, Malcolm Clemons and Michael Holloway II will all compete in the long jump on Friday. Both Penn and Clemons will then shift their attention to the triple jump on Saturday with Jonathan Miller.

This meet will also include the Gators making their debut in the Distance Medley Relay.

On the women’s side, Grace Stark will have a chance to improve upon her season best time of 8.07 in the 60-meter hurdle, which currently ranks second in the nation.

Imogen Barrett, the SEC Champion in the 1,500 meters in 2019, will run in the mile for her first appearance of the season. Gabrielle Wilkinson is coming off a ninth-place finish in the NCAA Division I Indoor Qualifying List last season in the 1,500 and is making her season debut. Claire Bryant, Kala Penn and Alexis Brown will all compete in the the long jump.

The women’s also have SEC Freshman of the Week, Talitha Diggs, along with Lauryn Ghee, Semira Killebrew and Taylor Manson all competing in the 200 meters. Natricia Hooper will be joining Penn, Clemons and Miller in the triple jump.

This will be the last indoor non-championship meet before Florida participates in the SEC Indoor Championship starting on Feb. 25.