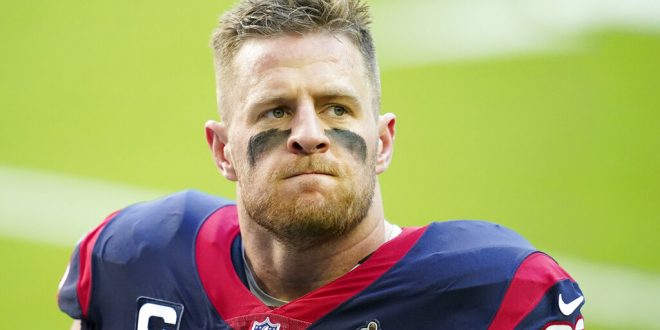 FILE - In this Jan. 3, 2021, file photo, Houston Texans defensive end J.J. Watt (99) looks on before an NFL football game against the Tennessee Titans in Houston. Watt and the Texans have “mutually agreed to part ways,” ending the tenure of the face of the franchise and adding another huge change to an offseason filled with upheaval. (AP Photo/Matt Patterson, FIle)

The Houston Texans have announced they released three-time Defensive Player of the Year J.J. Watt.

Watt spent 10 seasons with the Texans organization solidifying himself as one of the best defensive players in the 2010s. He is one of three people in NFL history to win DPOY three times. Drafted by Houston in 2011, Watt shared a heartfelt message thanking the city, fans and organization.

Houston, I wanted you to hear this directly from me… pic.twitter.com/YqT3P6Lb6l

Another big piece of this move by the Texans is where they stand as a franchise. It’s no doubt that they will enter some sort of rebuilding face with the release of Watt and the uncertainty behind disgruntled star-quarterback Deshaun Watson. In fact, Watson had some words of appreciation for the future hall of famer.

Where Could Watt End Up Next?

Despite a down 2020 season for Watt, he should receive plenty of interest on the open market. Now healthy, Watt will look to continue his career elsewhere. One person who seems particularly excited about J.J.’s release is his brother, T.J. Watt. T.J. had the perfect tweet calling his brother over in an attempt to recruit him to the Pittsburgh Steelers.

If the Steelers were to add J.J. Watt, they’d be bolstering one of the best defenses in the league. Although J.J. to Pittsburgh would seem like a perfect fit, there are plenty of other teams that could be in the running for his services.

With the NFL season now at a close, the rumors will certainly begin about where players end up. An offseason that will likely feature a league-wide quarterback carousel, exciting draft and big signings, where J.J. Watt plays next season will be at the top of this list.