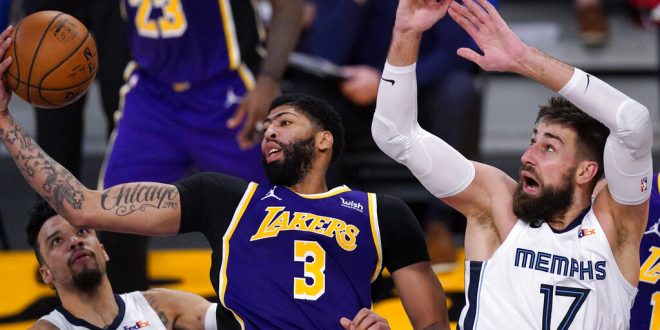 Los Angeles Lakers star, Anthony Davis, sat out the second half against the Denver Nuggets on Sunday when he reinjured his right Achilles. Kyle Kuzma replaced Davis with a little over two minutes left in the first half.  However, the Nuggets proved to be too much for the Lakers as they won 122-105.  The Lakers officially determined that it was a right Achilles strain.  Davis was scheduled to undergo an MRI today to see the severity of his injury.  Davis also missed two previous games this season with a similar injury to his right Achilles.

Anthony Davis sounds optimistic about the Achilles strain big picture wise, and initial exams didn’t reveal anything that would cause him real concern, he said, but they’ll do the MRI tomorrow to take a closer look: “Just try and figure out the best steps after [the MRI])."

Davis is no stranger to having the injury bug.  According to Fox Sports, Davis has already been injured a total of 14 times since the start of the new year.  Since Davis entered the league, he has missed anywhere from seven games to 26 games when he played for the New Orleans Pelicans.  The most significant of these injuries was when injured his left index finger with the Pelicans in his final season with the franchise.  There are concerns regarding his right Achilles since he reaggravated it within a week.  The Lakers medical staff will be evaluating this closely as Davis does not want to cause further damage to his Achilles this late in the season.

What’s next for the Lakers?

The Lakers are poised for another run in the playoffs, but the Davis injury will make this more difficult.  The Lakers will have to rely on key role players in Davis’ absence, particularly Kyle Kuzma.  Kuzma scored 19 points and grabbed eight rebounds in their loss on Sunday.  So far this season Kuzma is averaging 11 points and six rebounds, and his numbers should only improve in the absence of Davis.

LeBron James will also be expected to carry more of the workload in the absence of Davis.  However, more teams will be keener to potentially double team and stop James.  This should free up other players on the floor that will have to step up the rest of the season.