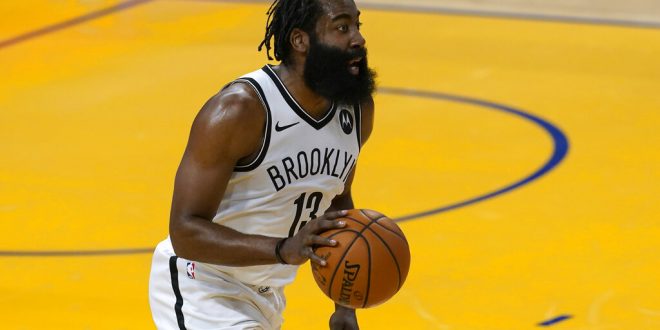 Brooklyn Nets guard James Harden brings the ball up during the first half of the team's NBA basketball game against the Golden State Warriors in San Francisco, Saturday, Feb. 13, 2021. (AP Photo/Jeff Chiu)

James Harden: Need I Remind You?

Allow Me To Reintroduce Myself

Nets star James Harden reminded us all last night why Brooklyn completed the blockbuster trade to acquire him to the team. The All-Star shooting guard achieved a double-double to will the Nets to complete a 24-point comeback versus the Suns without injured teammates Kevin Durant and Kyrie Irving.

The beard put on a lights-out performance and came up clutch in the game’s most crucial moments. Brooklyn had not taken the lead all game until Harden nailed a three-pointer with 31.4 seconds remaining in the fourth quarter.

Next Man Up Mentality

In a post-game interview, Harden spoke about his mentality while his team was trailing and how he managed to give the Nets a chance to come out on top.

“One man, two man go down, you know next man up… Got down 20-something at halftime and we didn’t give up. We didn’t quit. We kept fighting and cut the deficit down and kept fighting and gave ourselves a chance to win at the end of the game…”

Brooklyn will travel to Los Angeles Thursday to face the Lakers in primetime. The anticipated battle between Lebron and Harden will tip off at 10 P.M. on TNT as one can get a glimpse at the possible NBA Finals matchup.

Angel is a student at the University of Florida. She is a Multimedia Journalist who is currently a Sports Reporter and Writer at ESPN Gainesville. Follow her on Twitter (@angelcwells) and Instagram (@angel_wells). Be sure to follow her NFL Twitter account to stay up to date with the latest NFL news. (@UpToDate1NFL)
@angelcwells
Previous Men’s Basketball’s Late Rally Not Enough to Top Arkansas; Fall 75-64
Next McCann Set to Begin Season with the Mets