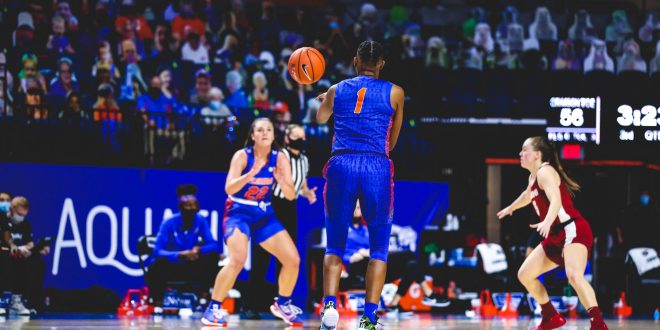 Florida playing back to back this week are coming off a tough loss against the Kentucky wildcats 88-80. Florida is without their star guard Lavender Briggs who is out for the season with a leg injury.

The Gators fought a tough battle but it was not enough to take down Alabama,  trailing the majority of the game by a large margin. The Gators ended the third quarter trailing  Alabama by 17 points.

Florida managed to clean it up and cut the deficit by six in the fourth quarter. Although they were able to make comeback it still was not enough for the Gators, falling 77-70.

Two players were in double-figures for the Gators.

Kiki Smith tied a career-high with another 27 point performance. Smith shot 4-of-6 from the three, and as a whole, the Gators shot 14-of-17 from the free-throw stripe. Faith Dut added 11 points and five rebounds for the Gators.

Smith Had this to say about her performance,

Honestly, I didn’t even realize it. Every time I try to shoot the ball it’s just my mentality to score. Whether it goes in or goes out, keep shooting. That’s what Coach Cam tells me, tells everybody — just keep shooting. Just having the mindset to be aggressive and nail the open shots is what my mindset has been really.”

Next, up for the Gators, they finish out the last week of regular season play as they head to Missouri on Sunday to take on the Tigers.

Alabama is coming off an impressive 92-78 win against Auburn. The leading scorer for the Lady Tide was Jasmine Walker who an outstanding game against the Tigers racking in 41 points.

In Alabama’s matchup against Florida, Walker followed up her double-digit performance with 22 points. Two other Alabama players followed alongside her, Jordan Lewis with 20 and Ariyah Copeland 16 points.