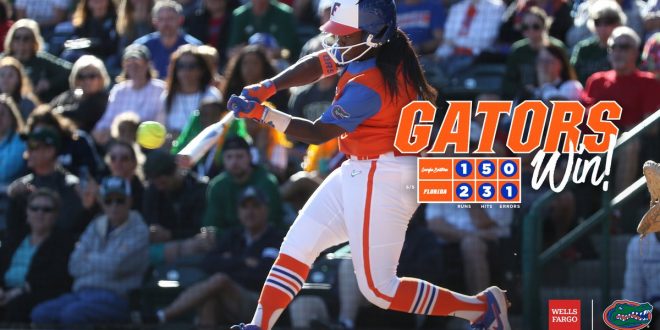 The sixth ranked Gator softball team (6-0) continued its hot start to the 2021 season with two wins against Georgia Southern (0-3) and Charlotte (3-2) in the Bubly Invitational.

Florida shocked Georgia Southern on a walk-off two-RBI single in the bottom of the seventh to win 2-1. Then they turned around and took down the Charlotte 49ers 5-2.

With the two wins, the Gators nab their sixth win on the young season, but maybe more importantly, head coach Tim Walton earned his 800th career win as a Gator.

Rylee Trlicek faced off against the Eagles’ Kyleigh Richardson in the first game of the doubleheader Saturday. And fans at Katie Seashole Pressley Stadium were treated to a true pitcher’s duel.

While there were only a combined five strikeouts between the pitchers, both were able to stifle their opponents’ bats. Neither team scored until the top of the fifth when Aaliyah Garcia ripped a line drive into the gap in left-center for a double.

After that hit, the Eagles’ fifth of the game at that point, Trlicek’s day was done, and Natalie Lugo came on in relief. With Garcia on third, Ashlynn Gunter grounded a ball up the middle to shortstop Kali Reis, who couldn’t make a play on the ball.

Garcia scored on the fielding error and the Eagles led, 1-0. Both teams went the next two innings without scoring, leaving the game to be decided in the bottom of the seventh.

Eagles head coach Kim Dean kept Richardson pitching in the seventh inning to try to finish the complete-game shutout.  Gators hitters Avery Goelz, Hannah Adams and Kendyl Lindaman all walked, leaving the bases loaded for Charla Echols with two outs. And Echols came up big, as she has many times in this early part of the season as she slapped a grounder between second base and shortstop to score Goelz and Adams and pull off an improbable comeback and avoid a disappointing upset. The Gators lived to play another game, and that game was a mere 45 minutes away against the Charlotte 49ers.

In the second game of their doubleheader, the Gators didn’t take nearly as long to hit the ball well. 49ers starter Maddux Hughes opened the game up by hitting Hannah Adams, putting a runner on first.

That brought right-handed hitter Kendyl Lindaman to the plate, who promptly powered a ball over the right-field fence to put the Gators up 2-0 early. After giving up two runs in the first, Hughes’ afternoon was over, and Madelyn Wright came on in relief.

Echols then drew a walk, and Goelz singled to put two runners on for freshman Emily Wilkie. And Wilkie left no doubt. The right-handed hitter ripped a three-run shot over the left-field fence to stretch the Gator lead to 5-0.

Two HUGE home runs by @Kendyl_23 & @wilkie_emily7 were the difference in this one! #GoGators pic.twitter.com/8AbAg05Taa

Once the Gators went up by five, they just had to rely on their starter, Elizabeth Hightower, and she answered the call. In her second win of the season, Hightower threw 5.2 innings, struck out four and gave up two earned runs.

At one point in the game, Hightower set down 12 straight 49er batters, so she did her job of holding that established Gator lead. Natalie Lugo came on in relief in the sixth inning and earned the save after giving up no hits or runs through 1.1 innings pitched.

Walton and the Gators

Coach Tim Walton picked up his 800th career win as a Gator Saturday in his 16th year as a Florida Gator.

The Gators will wrap up the Bubly Invitational with another doubleheader Sunday. The first game against Charlotte is slated to get started at noon.

I'm a third-year student at the University of Florida passionate about storytelling and sportswriting. My goal is to work in communications for a professional sports team after I graduate.
Previous Gators Soccer Victorious in Spring Season Opener
Next Thirteen Inning Thriller- Miami Evens the Series With Gators in Baseball