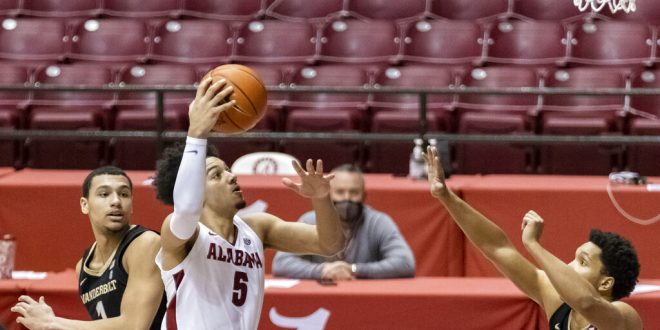 Alabama guard Jaden Shackelford (5) gets by Vanderbilt forward Dylan Disu (1) and guard/forward Braelee Albert (11) for a shot during the second half of an NCAA basketball game on Saturday, Feb. 20, 2021, in Tuscaloosa, Ala. (AP Photo/Vasha Hunt)

The SEC-leading Alabama (18-5) heads to Fayetteville tonight for a Top-25 showdown with Arkansas (17-5). If the Crimson Tide is able to defeat the Razorbacks in Bud Walton Arena, Bama will clinch the No. 1 seed in the SEC Basketball Tournament.

Bama, ranked sixth in the nation, leading the SEC with a (13-1) record record. The Hogs are tied with LSU for second in the conference with a (9-4), ranking them 20th in the nation.

Alabama has squared-off against Arkansas once this season (Jan. 16), with the Crimson Tide shutting the Razorbacks out with a 90-59 rout in Tuscaloosa. However, Arkansas is playing much better basketball these days.

Juwan Gary has been serving as a dominant presence down low, but he won’t be available for the game due to a shoulder injury. This should help Arkansas get inside more while having the comfort of playing on their home floor, too.

The Razorbacks must come out of the gates with offense and outlast the talented shooters of Alabama for an upset victory.

Alabama has an almost perfect 13-1 SEC record and is holds the No. 6 in the nation. The defense isn’t always great, but the offense is able to bail the team out by scoring more. Alabama’s offensive success stems from how good they are behind the arc.

The Crimson Tide have rolled up 81 or more points on offense in each of the past three outings, including a 115-point outburst against Georgia.

The Crimson Tide are averaging 1.10 points per possession and have only failed three times to break the 80-point mark in conference play. In the first meeting with Arkansas, they shot the Razorbacks right out of the gym, making 15 3-pointers.

Alabama shoots 3s on 47.2 percent of its field goal attempts, which is the highest rate in the SEC. Not only that, the Crimson Tide also shoot the highest percentage in the conference, at over 36 percent.

While Alabama’s high-paced 3-point shooting offense gets all the attention, it’s their defense that is the actual catalyst for their success. Alabama is the No. 1 team in the SEC in terms of defensive efficiency, allowing only 0.92 points per possession during conference play. They don’t allow their opponents to get clean looks, and they are first in 3-point defense and second in 2-point defense.

Ever since the loss to Alabama, Arkansas has been red-hot, winning seven straight games in SEC play. With their recent upset victory over the No. 10 ranked Missouri Tigers, the Razorbacks find themselves among the Top 20 teams in the NCAA.

They have played fantastic defense and have been giving their opponents fits. On their home court they are practically unbeatable, including a 13-1 record this year.

The Razorbacks have been average offensively during SEC play and it’s their offense that really let them down the last time they faced Alabama. The Razorbacks are averaging 1.04 points per possession but are in the middle half of the conference in both 3-point and 2-point shooting percentage.

However, Arkansas has greatly improved on defense during this seven-game win streak, as they are solid in pretty much every defensive metric and do not have any glaring weaknesses.

The Arkansas Razorbacks have been powered by their star guards, Moses Moody and JD Notae, and average an incredible 82 points on team offense per game. They’ll likely come up just short in pursuit of a regular-season league title, but they’re improving their seeding for the SEC tournament by the day, and will be a tough out come NCAA Tournament time.

About the only positive for Arkansas at Alabama on Jan. 16 was the play of Moses Moody. Nate Oats remembers the freshman's 28-point performance well.

“Moody killed us," he said. https://t.co/Oe6FGCAePC

Tip off is set for 8:00 pm and the game will be televised on ESPN2.