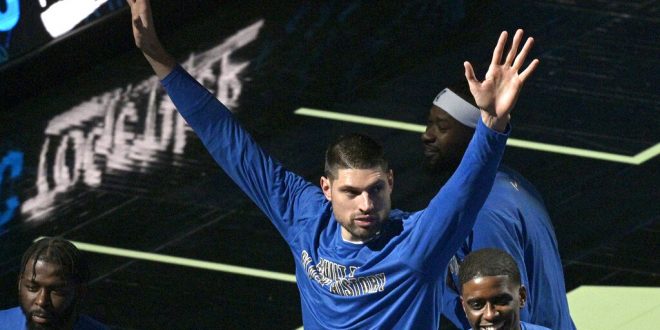 Orlando Magic center Nikola Vucevic acknowledges the crowd after it was announced, before an NBA basketball game against the Detroit Pistons, that he was selected for the upcoming All-Star game, Tuesday, Feb. 23, 2021, in Orlando, Fla. (AP Photo/Phelan M. Ebenhack)

The Orlando Magic goes on the road to face  the Brooklyn Nets on Thursday, February 25th. Last time these teams met, Brooklyn topped the Magic 122-115.

Orlando enters the court with a 5-5 record in their last 10 games of the season. With a 13-19 record, they are currently sitting at the 12th spot in the Eastern Conference.

Leading the team is Nikola Vucevic who is averaging 23.9 points and 11.7 rebounds. Shooting guard Evan Fournier is also averaging double digits, as he averages 18.8 points and 3.9 assists.

The Nets on the other hand are averaging 121.2 points with an impressive 50.1 percent shooting. Kevin Durant leads the team with 29 points and 5.3 assists while Kyrie Irving is averaging 27.4 points and 4.7 rebounds.

They are allowing 36.6 percent shooting from deep and are grabbing 43.5 rebounds per game.  The Nets are now a half-game out of first place in the Eastern Conference with a 21-12 record.

Brooklyn guard Joe Harris commented on his teams’ boost of confidence after winning so many games in a row.

“I think you just play with more confidence,” said Harris. “When you’re winning games, you have the same level of confidence. I think even tonight, too, where they make a run in the fourth quarter and test you a little bit. You still have the confidence where, ‘alright, we’re still going to win this game.”

Orlando will be playing without Aaron Gordon and rookie Cole Anthony due to injuries. Gordon has been out for a few weeks with an ankle sprain while Anthony is out due to a right rib fracture.

As for the Nets, they will be without star Durant who has missed six of the Nets’ seven latest victories.  He has been ruled with a hamstring issue. Brooklyn head coach Steve Nash said that he was expecting Durant to be back before the All-Star Break. At the same time, he assured that they did not want to rush the recovery process.

“We definitely have kind of slowed things down in that respect, not putting any pressure on him, not trying to rush him back in any capacity and just make sure that we give him the right amount of time to be more than healed, to be strong and conditioned to come back to the team” said Nash. “So we’re monitoring it. We’re not in a rush, but I don’t think he’ll be out until the All-Star break.”

Jeff Green, who missed Tuesday’s game with a right shoulder contusion, and Landry Shamet, who left the game with a chest contusion, have been listed as questionable.

Camila is a senior at the University of Florida, who served as a beat writer for the women's basketball team from 2019 until the 2021 season. She was also a beat writer for the Gators football team during the 2020 season. Camila is also WUFT's news director as well as a sports reporter/anchor.
@CamilaMaffuz
Previous Chiefland Softball Takes Hit in Second Home Game
Next Gator Softball looks for 9-0 start against UNF

Since Ben Simmons was traded to Brooklyn, he has not performed at the level he …