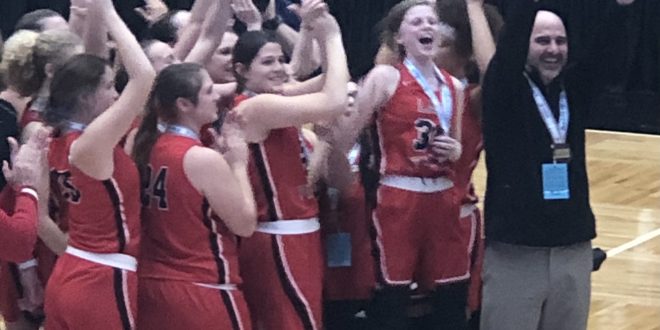 On Friday night, The Hawthorne Lady Hornets and the Ponce De Leon Lady Pirates entered the RF Funding Center in Lakeland with a single goal on their minds — exiting with a state championship trophy in hand.

With a loud and enthusiastic crowd, the two well-coached and aggressive teams tipped off. Though fans in attendance clearly favored Ponce De Leon, Hawthorne jumped out to an early lead. Throughout the first three quarters, Jhalea Jackson’s ability to attack the boards and Jayla Williams’ ball facilitation allowed them to prevent any lead changes.

Hawthorne’s most prominent offensive weapon, however, was 6’3″ senior Mya McGraw, who had a game-high 17 points for Hawthorne.

Mya McGraw doing what Mya McGraw does – dominating down low. The 6’3” senior has 15 points in the first 3Q.

At the start of the fourth quarter, however, there was an obvious shift in mood. Ponce De Leon’s numerous supporters, who were previously discouraged, grew louder and louder as the Pirates’ full court press suffocated Hawthorne’s offense.

In the last five minutes of the game, the Pirates’ forced a slew of turnovers, and the Hornets’ seven point lead began to dwindle. Ponce De Leon’s Michelle Neal scored four straight points in a flurry to bring the Pirates’ within three, and Cadence Alford hit the game-tying triple to knot it at 37 with two minutes left.

After a couple of Pirate timeouts, the clock was under 20 seconds with the ball in Ponce De Leon’s hands. The crowd grew restless as the Pirates’ backcourt swung the ball around the perimeter for senior Lily Brooks to tee up a shot from downtown.

The crowd went berserk as the ball hit the bottom of the net with 8.5 seconds to go.

Hawthorne was unable to respond, and that was all she wrote. A 10-0 run in the last five minutes of the game landed the trophy in the hands of the Lady Pirates.

After emerging victorious in the 2020 1A state championship, the Hornets had high hopes for this year. Though it ended in a heartbreaking loss in the state finals, the Hornets have a lot to be proud of when looking back at their ’20-’21 season.

Their relentless press defense and incredible offensive chemistry lead them to a 20-5 record, placing first in both their district and their region. Along with a formidable team performance, a couple of players were able to land spots on the state leaderboard for certain statistics.

Williams and McGraw will graduate this spring, as well as sharpshooter Oshiana Buie and a couple others. Though these are notable losses, coach Cornelius Ingram and his relatively young cast of players will look to continue Hawthorne’s streak of finals appearances next year.