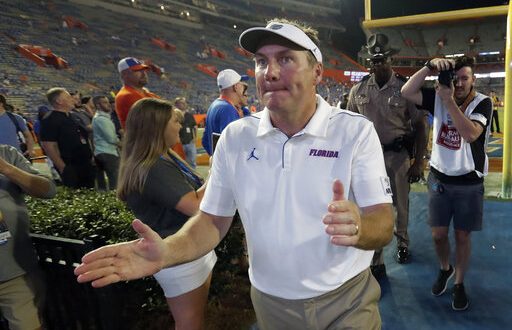 Florida head football coach Dan Mullen gave an update on the state of Gators’ football through five spring practices. Mullen highlighted the attitude and approach his players are bringing to practice.

Coach Mullen commented on how his team has pushed each other to get better through the beginning of spring practices.

As a redshirt senior, defensive lineman Zach Carter knows the Florida Gators football program. His knowledge of the Gators’ defensive will likely be an asset in helping lead this young Florida defense.

In 2020, Carter led the Gators with 5.0 sacks and 9.5 tacks-for-loss. Additionally, the lineman earned SEC Defensive Lineman of the Week honors for his performance in Florida’s game against the South Carolina Gamecocks.

Carter’s veteran experience gives him the ability to understand the scheme and create favorable matchups against opponents. According to Mullen, Carter has the versatility to play both the inside or the outside of the defensive line.

Mullen stated one of the most important things is for Carter is to grow into his role as a leader.

When asked about filing the hole left in the offense by record-breaking tight end Kyle Pitts, Mullen made it simple. He doesn’t expect his guys to be Pitts.

After smashing the Florida record books and being labeled as one of the all-time greatest tight ends in college football, the Florida offense will have to fill in the holes left by receivers such as Pitts.

However, Mullen isn’t focused on making carbon copies of Pitts. Instead, he is eyeing how to highlight the strengths of the players on his roster and allowing them to play to their greatest potential.

With the expectation set to play up to your potential, there are a few Gators who have stood out in spring practices. Receivers Ja’Quavion Fraziars and Ja’Markis Weston enter this season with some experience after making multiple appearances in games last season.

However, star receivers like Kadarious Toney, Trevon Grimes and Pitts, both had limited catches in the 2020 season.

Throughout spring ball, Mullen noted the size and ball skills he has seen out of of the sophomores.

The legacy of the role of quarterback at the University of Florida has only grown. The Heisman nomination performance of Kyle Trask aided in the growth of expectations for Gator quarterbacks.

However, Mullen is confident in the abilities of his quarterback room. More specifically, Mullen believes in the strength and skill of likely starting quarterback Emory Jones.

Jones, the redshirt junior, is the first Florida quarterback Mullen recruited after taking over as head coach in 2017. Mullen spoke about the maturity he has seen in Jones this spring.

In addition, Mullen believes in the ability Jones has to scramble and extend plays. In combination with his arm strength, there is confidence in Jones to potentially be a strong QB1 for the Gators.

However, with Florida being a quarterback-based offense it will be important to have a strong set of backups ready. Redshirt freshman Anthony Richardson saw some playing time in the Gators’ Cotton Bowl loss last season. He brings a limited amount of experience into this 2021 season.

On the other hand, Florida welcomed two freshman quarterbacks to their roster in Carlos Del Rio-Wilson and Jalen Kitna.

For now, the Gators are focused on spring development but eyeing that Sept. 4 matchup to kick off the season.