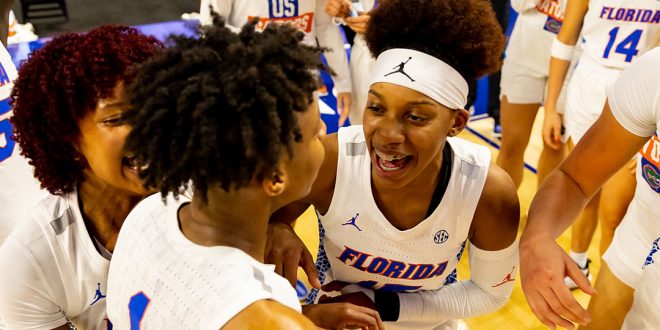 Auburn Had No League Wins.

The Gators had to stop Auburn’s All-SEC performer Unique Thompson and the Gators did a nice job, holding her to 14 points and 10 rebounds.

Florida was led in scoring by senior guard Kiki Smith who had an outstanding performance filling the stat sheet with 19 points, five rebounds, and five assists. Smith landed herself in the 1,000 point category for her career as a Florida Gator; she’s the 26th person in program history to reach that mark.

Alongside Smith,  the Gators had two players in double-figures in Danielle Rainey (13), and Kristina Moore (11).

Another Gator who stood out was  Jordyn Merritt with nine points and seven rebounds. Merritt was recently named to the All-SEC Freshman Team.

Florida coach Cam Newbauer is glad his team won and is advancing.

“Really proud. We talk about being ready all year when your number is called, being ready to perform when we need you to produce. That’s exactly what happened today. Jordyn Merritt takes that huge charge. Danielle Rainey hits the two threes, with three minutes to go. I forget what it was, big shots. Kristina Moore with that driving layup, that allowed defensive stops. Nina in her first half having some good scores, that attack at the rim. Second and third quarter, the rebounds. Faith had some big baskets for us. Everybody. Our bench was energized, engaged.”

I love the resolve we’ve had all year. Just so proud of our team. It doesn’t have anything to do with the results, just has to do with competing, sticking together and being the best version of ourselves.”

Florida will advance to the second round of the SEC tournament where they will meet fifth seed Kentucky.