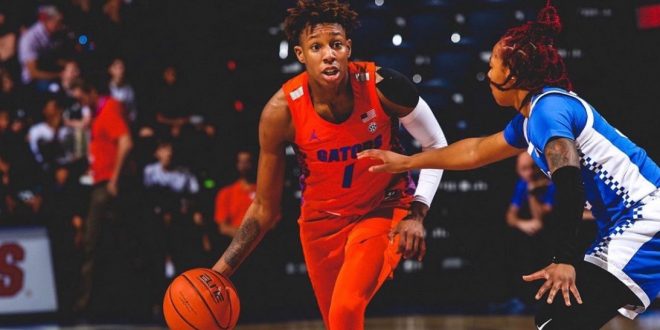 Smith led the Gators in points in the first half. She put up 18 of the 32 first half points for the Gators.

The second-highest point-scorer for the Gators in the first half was Nina Rickards with five points.

For Kentucky, Rhyne Howard was the only player to come close to Smith’s first half stats, putting up 16 points herself.

With another 18 points in the second half, Smith had a career high scoring game today, with 36 total points. She singlehandedly put up more than half of Florida’s points.

Head coach for the Gators, Cam Newbauer, said that Smith did everything she could for the game and that the team was missing some crucial action from some of the other members of the team.

Howard was once again the leading scorer for Kentucky in the second half with 11 points.

Kentucky and Florida went back-and-forth the entire game, neither team taking a lead by more than five points until the last four minutes of the game.

No. 12 seeded Florida held its own against the No. 5 seeded team until a defensive collapse by the Gators and an offensive push by the Wildcats. As the game clock started running down, Smith found herself double and triple-teamed by Kentucky. All the while, Howard pressed the glass and made herself available at every opportunity for layup after layup.

What’s Next in Hoops

Kentucky will move on in the SEC Tournament, facing Georgia on Friday afternoon. Georgia is coming off of a regular season win, 95-80 victory over Florida on Sunday.

For the Gators, however, this marks the end of their season. While sad about the outcome, Newbauer said that he is still proud of what his team accomplished today.

Rylee is a fourth year journalism major with a specialization in sports and media at the University of Florida College of Journalism and Communications.
Previous San Diego Padres Looking to Make Big Jump This Season
Next Santa Fe High School Heads to State Boy’s Hoops Championship