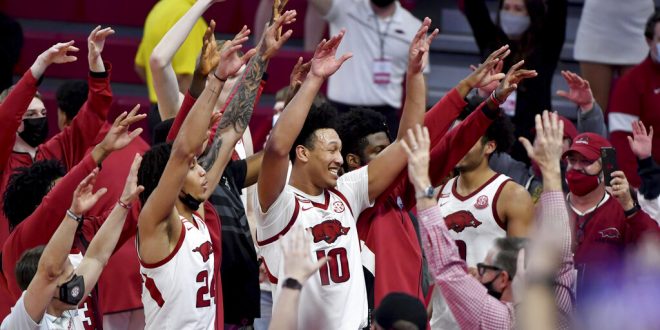 #2 Arkansas vs. #7 Missouri in the SEC Tournament

The #7 Missouri Tigers (16-8) are taking on the #2 Arkansas Razorbacks (21-5) on Friday at 7 p.m. in the 2021 SEC Tournament. The tournament is taking place in the Bridgestone Arena in Nashville, Tennessee.

The Tigers defeated #10 Georgia in the second round of the SEC Tournament on Thursday. The Bulldogs were down 10 points with only a few minutes left on the clock, but they could not make a comeback.

Freshman Moses Moody leads the team in points, with an average of 17.5 points scored per game.

The Tigers also have a senior trio that leads the team’s statistic: Dru Smith, Mark Smith, and Jeramiah Tilmon. Dru Smith leads the Tigers with an average of 14.2 points, 3.8 assists, and 2 steals per game. Tilmon has an average of 7.4 rebounds and 1.5 blocks per game. Mark Smith’s field goal percentage is 37.9%.

Arkansas seems to have a leg up against Missouri in terms of most of the statistics for the season, though both teams seem to have a powerful trio of seniors up their sleeves.